You are here: Home / News / News / Love is in the Air for Veterans

Love is in the Air for Veterans 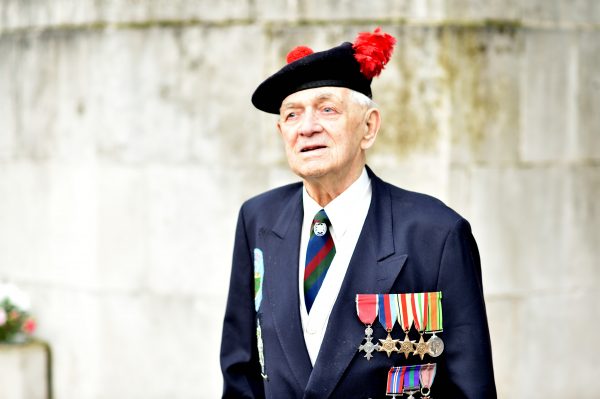 The Valentine card has been delivered to veterans across the country as part of the charity’s concerted effort to ensure that the veterans they support receive regular contact during the pandemic.

The Taxi Charity asked veterans for tales of wartime “brief encounters.” John Clarke MBE, 96, who served with Black Watch shared his story of an incident at St Enoch’s Station in Glasgow in the Autumn of 1943.

“Sometimes it pays to volunteer, as I did in late autumn 1943, for life was becoming boring in our makeshift camp in Djidjelli in Algeria. We were on the beach doing nothing when an officer approached saying “I want two volunteers”. I looked at friend Vinnie, he nodded, we both stood up and said, “I will”. “Good” said the officer, “get your kitbags, there’s transport ready to take you to Brigade Headquarters”.

“We duly arrived at Brigade HQ and minutes later we were on our way to the harbour, where we boarded the French ship ‘Cuba’- smelly and ancient – bound for the UK. We were told would be guarding POWs, who would be imprisoned in the UK.

“The trip was uneventful, and we arrived in the Clyde, given seven days leave and train tickets, and told to return to St. Enoch’s Railway Station in Glasgow, where transport would take us to our return ship. As I had no home in Manchester to return to, I stayed at the Salvation Army Hostel near the City Centre and met old friends, most of whom were working round the clock on war work. But all in all, a happy visit. Time came for me to return to Glasgow, and I duly arrived at St Enoch’s Station about midday.

“I was walking along the platform towards the exit when a young lady porter, dressed in station uniform and wearing tight trousers, came speeding past me. About ten yards in front of me she stopped to pick something up and as she bent down, even though I was carrying my kitbag on my left shoulder, I instinctively gave her a loving smack on her rear end. She stumbled over, I realised my mistake, and put my kitbag down to assist her to her feet. No need, she was up like a shot, eyes blazing, fist in my face, anger in every movement. “Awa ye midden ye” she shouted; nearby passengers gave her support. Then seeing my look of contrition, she did an amazing thing. She put her arms around my neck and gave me a kiss to remember. The passengers clapped. “Come back safely, soldier”. She said as she sped away.”

The Taxi Charity wonders if the station employee remembers this incident as vividly as John does some 78 years later. Perhaps we could find her?