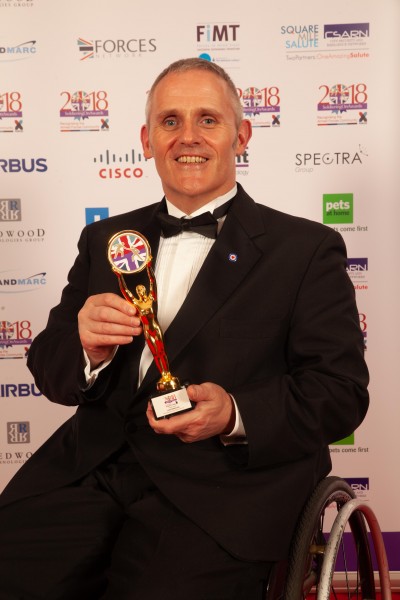 RAF veteran and Invictus athlete Luke Delahunty has been crowned this year’s People’s Choice award winner at the Soldiering On Awards. Luke was announced as this year’s winner at the special event held in London which recognises the achievements of those who have served their country and the diverse people and groups who work in support of the Armed Forces community.

The RAF’s leading welfare charity, the RAF Benevolent Fund, who has supported Luke for more than 22 years, nominated him for this prestigious award in light of his outstanding contribution to other spinal injury victims.

On collecting his gong, Luke said: “It still seems quite unreal that I won the award. It’s going to take a little while to process it all I think. It’s such an honour and a surprise to have won, especially considering the strengths of the other finalists.

“And knowing that it was voted for by the public makes it even more special. I am so touched and humbled to be the winner and after spending the last few weeks in hospital it was just the pick-me-up I needed.

“Thank you to the RAF Benevolent Fund for putting me forward and to everyone that voted for me but more importantly, my heartfelt thanks to everyone that has been with me or helped me in my journey since my injury, you all deserve this award.”

It was 22 years ago that Luke was left paralysed from the chest down when he was involved in a road traffic accident. At just 24-years-old, the incident ended Luke’s military career as an RAF Regiment Gunner and months of painful recovery in hospital followed.

But he found a light in the darkness of his paralysis and began to take part in sport as part of his treatment. He took up handcycling, rowing and wheelchair rugby.

Luke was assisted by the RAF Benevolent Fund when he first left the forces, with furnishings for his home and IT equipment as part of his resettlement training. The charity also contributed to the cost of a hand cycle to ensure Luke was able to continue his quest for sporting excellence.

Air Vice-Marshal David Murray, Chief Executive of the RAF Benevolent Fund said: “Congratulations Luke! The RAF Benevolent Fund is proud to have been there to support such a worthy winner on the road to his recovery. I know this win will mean a great deal to Luke, as it was voted on by the general public.

“The RAF Benevolent Fund has supported Luke every step of the way since his accident in 1996 just as we have stood side by side with all of the RAF Family since its formation 100 years ago.”

Since his injury Luke has cycled from London to Paris, qualified as a scuba diving instructor and achieved selection to the UK Team for the Invictus Games, not once but twice.

He has also dedicated time in working with young people facing a similar diagnosis to him both at the National Spinal Injuries Centre in Stoke Mandeville Hospital, seeking out those who were overwhelmed by the unexpected turn their lives have taken and by visiting schools, giving talks to young people about overcoming adversity and achieving their goals.