On 10 November the Taxi Charity learnt that Major James Corrigan, one of the charity family had died in hospital. 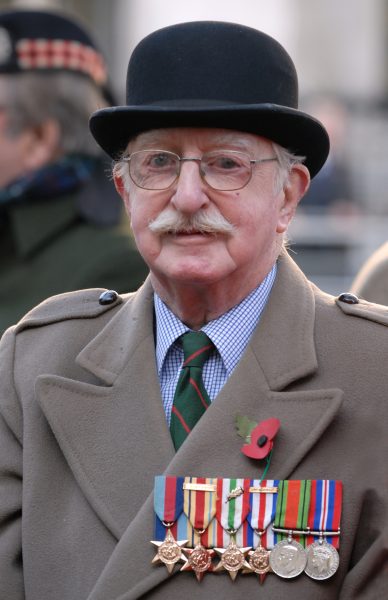 Major Corrigan was born in Ireland in 1924, and aged 17, joined the 6th Battalion Durham Light infantry. During WWII be fought in Sicily and landed in Normandy on D Day.

Major Corrigan, 97, lived in Egham, Surrey, with his partner Norma. He had three children, Alison, Michael, and Bernard and was a regular on Taxi Charity trips to Normandy and The Netherlands, as well as the annual summer trip to Worthing.

“Our father James loved his time spent with the Taxi Charity for Military Veterans. From the official events, parties and especially the collections at the tube stations, all made him feel young again. I was lucky enough to accompany Dad to The Netherlands with the Taxi Charity “Return of the Liberators” trip, they were all old men but as soon as they got together, they became young again. In fact, the hardest challenge I had that trip was trying to get my then 91-year-old father out of the bar at night and to stop him singing The Blaydon Races. James Corrigan RIP 17/01/1924 – 10/11/2019. Howay the Lads.”

“I first met James in 2015 when I was his driver on our “Return of the Liberators” trip to the Netherlands and got to know him and his son Bernard well. He was a truly delightful gentleman, a wonderful character and our friend.”

“James and I built a really good relationship as we had both been riflemen and he loved the green blazers and berets. He was a wonderful guy, one of the good ones. He loved going back to Normandy with the Taxi Charity and was usually accompanied by his son Bernard. He would chat with everyone and when he was talking to other veterans, despite being a Major, he never had any airs and graces, he was warm and friendly with everyone. But if I ever did anything he didn’t like he would certainly tell me what he thought, always in a no nonsense, but polite way in his lovely thick Geordie accent. He will be missed.”

“This is very sad news, another one of our dear heroes has gone. My warmest condolences from Normandy to his family.”

Major Corrigan’s funeral will held be on Thursday 2 December at Our Lady of Assumption, Englefield Green, Surrey.