You are here: Home / News / News / Man from Guildford to compete in 100km challenge for military charity

Man from Guildford to compete in 100km challenge for military charity 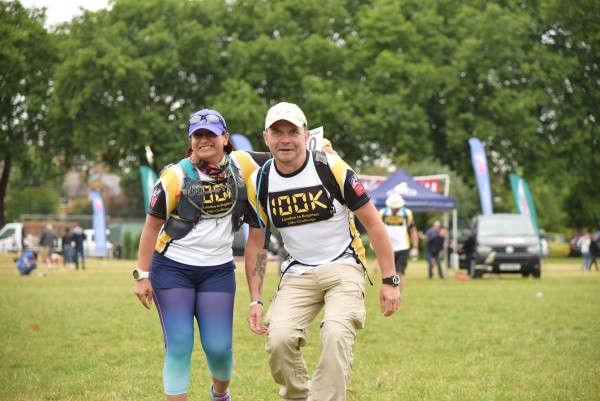 A man from Guildford is currently training to compete in a 100km walk from London to Brighton for Blind Veterans UK, the national charity for blind and vision-impaired ex-Service men and women.

Chris Garwood, 47, will be attempting the ultra-challenge for the third year in a row. Chris completed 72km in his first year, despite not having trained, but was unfortunately unable to finish due to injuries sustained to his feet. Last year, after saying he would never do it again, he once again found himself at the starting line. He recalls: “Even though I didn’t finish in 2016, I was still incredibly happy with what I’d achieved. 72km is an awfully big distance and not a lot of people can say they’ve walked it in one go!

“At the time, I was happy to leave it at that. But afterwards, I had so many voices in my head saying I had to give it another crack that I felt I just had to finish it!”

When he’s not competing in ultra-challenges, Chris works at Sky as a Specialist Engineer. It was through his work that he met Joey Sharma, a long-time fundraiser for Blind Veterans UK and, as it turned out, the key to his success in last year’s event. He explains: “I was at Joey’s house on a job and I came across all her medals. She told me about the 100k London to Brighton and that’s how I initially came to sign up in my first year. I kept on seeing her throughout the route, and so when I realised I had to give it another go, I decided to give her a call to see if she’d help me out with my training!

“She happily obliged and thank goodness she did! She made an enormous difference. The motivation, the insight, the advice – she changed everything. I actually found myself enjoying walking for the first time in my life. Previously I’d always struggle to go out by myself but, thanks to Joey, I was able to go out and do 40km walks on my own. She gave me a completely different mind-set and I desperately needed it.”

“Obviously my time in the military community provided me with an immense amount of appreciation and respect for the sacrifices made by the brave men and women of our Armed Forces. It’s fantastic to see the work the charity does in ensuring that veterans living with sight loss get the support they so richly deserve.

“The support you get from the charity along the route of the 100k is fantastic, too. They cheer you on, constantly, and trust me, it makes a huge difference. What’s also great is that, through my work, I’ve come across people whose parents have been supported by the charity, and the gratitude they have for the fundraising I’ve done is incredibly humbling.

“There’s no feeling quite like knowing you’ve given something back to those who’ve given us so much.”

After finishing last year’s event in 24 hours 52 minutes, Chris is determined to finish this year’s event in under 24 hours. He explains: “I’m excited to get out there again. I’m doing it with three other guys from work and right now we’re just focusing on getting the training started again.”

Such is Chris’ enjoyment of the event that he’s desperate to encourage as many others as possible to get themselves signed up. He says: “So long as you put in the training, the distance shouldn’t be an issue. Forget about the fact that it’s 100km, just think check-point to check-point. Seeing the veterans at the fish line makes all the aches and pains worthwhile.

To support Chris as he takes on the 100k for Blind Veterans UK, please visit: justgiving.com/chris-garwood47.