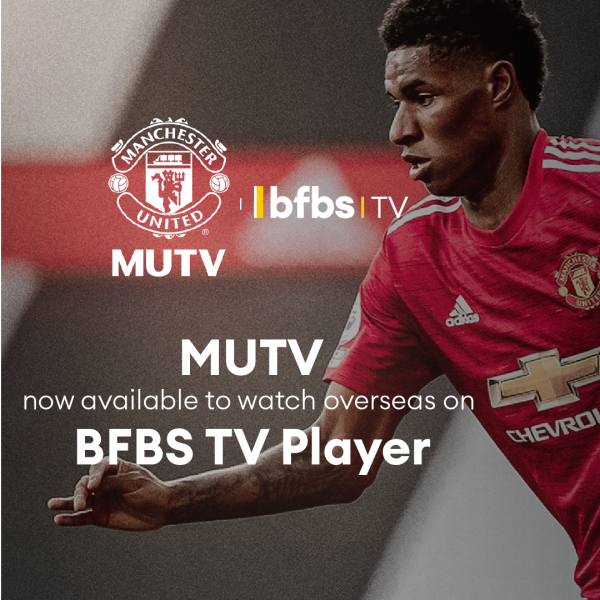 BFBS has been broadcasting to the UK armed forces community for over 75 years, bringing the best of UK TV, sport, music and entertainment to forces and their families worldwide, wherever they may be stationed.

MUTV will be available overseas* on BFBS TV Player, offering dedicated club programming including highlights and full replays of all Manchester United Premier League and UEFA matches, live and exclusive women’s and academy team games, plus unrivalled access to pre-season tours. In addition, there are exclusive documentaries, live studio shows, player and legend interviews, plus the manager’s weekly press conference and much more.

BFBS TV Player offers the UK armed forces and their families overseas access to 35+ channels live and catch up via mobile, tablet and connected TV devices.

“The Club has always been supportive of the armed forces, offering a number of complementary tickets to each home game to deserving service personnel. This year, as in previous years, we also donated our dedicated Remembrance Day match worn shirts to be auctioned by the Royal British Legion.

“MUTV is already available in 56 territories worldwide and we are proud to have teamed up with BFBS TV Player to extend this service by offering subscription free access to members of the armed forces.”

“Watching football is a vital part of ‘down time’ in the military, which is why it’s always been central to BFBS’ entertainment offering to our armed forces posted overseas.

“It’s great to be able to enhance our football content by adding MUTV to the entertainment mix, and we’re confident that its programmes will be very well received by our audience.”

(* Excluding UK, Isle of Man, the Channel Islands and Ireland)