You are here: Home / News / News / Many people think that the Taxi Charity only supports veterans from WWII, but the charity promotes the wellbeing of veterans from all conflicts

Many people think that the Taxi Charity only supports veterans from WWII, but the charity promotes the wellbeing of veterans from all conflicts 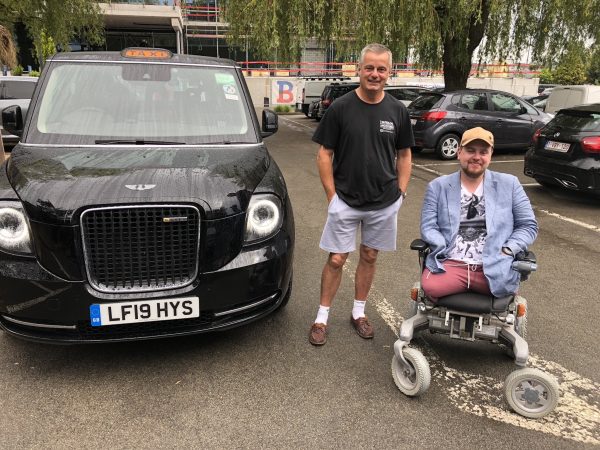 “The support the Taxi charity gives to WWII veterans is very well documented, but less well known is that they support veterans from all conflicts, and I have been very lucky to take a younger veteran to Waterloo Uncovered.

“Waterloo Uncovered is a fabulous UK charity that combines world‐class archaeology on the battlefield of Waterloo with veteran care and recovery. They approached the Taxi Charity to see if there was a cabby who would be happy to volunteer to take Matt Weston, a triple amputee, and his wheelchair over on the ferry to Belgium to participate in the 2018 dig and support his care requirements while on the continent.

“Having researched the charity, I jumped at the chance and have been lucky enough to go to the Waterloo Uncovered annual dig in Belgium twice with Matt. British field archaeologist Phil Harding, from the Ch 4 TV series Time Team takes part in the dig. He is an interesting character whose passion for archaeology is infectious. He is real advocate for how this adventure into the past is helping the wellbeing of the veterans and serving personnel who attend.

“Matt and I have really got to know each other very well and I was delighted when he joined the Taxi Charity at their Christmas party in 2019. The interaction between the older and younger guests, including many serving personnel is always a treat to see.

“The COVID restrictions led to the Waterloo Uncovered digs in 2020 and 2021 being cancelled but I really hope that next year I will be able to return to the site with Matt.”

Dave Hemstead, 60, is from Morden and has been a London Cabby for 19 years and has been volunteering for the Taxi Charity for over 15 years.

The Waterloo Uncovered project had its origins in the shared experience of two men, Mark Evans, and Charlie Foinette. Both had studied archaeology together and both subsequently served as officers in the Coldstream Guards – a regimental connection that was to prove key in opening this closely protected battlefield to archaeological exploration.

Upon leaving the Army, Mark was encouraged to revisit archaeology as a means of working through the mental legacy of his own experiences in Afghanistan. Meanwhile, Charlie, still serving with the battalion, took his men on a tour of Hougoumont Farm on the battlefield of Waterloo. Hougoumont is ‘sacred ground’ to the regiment: the walled compound of farm buildings, gardens and orchards served as a fortress out in front of the allied line and became the scene of a dramatic “battle-within-a-battle”. It’s one of the Coldstream Guards’ proudest battle honours (although, as the archaeological evidence was to show, one that they share with other regiments!).

Mark and Charlie made two important realisations: that little archaeological work had taken place on the battlefield; and that being part of a team working through the processes of an archaeological dig has the potential to help people with their recovery and rehabilitation. Building on the regimental connection, and with the cooperation of Project Hougoumont who maintain the site, the first group of archaeologists, VSMP, and experts in an assortment of specialisms began their explorations in the year of the battle’s bi-centenary, 2015. Since then, participants have made important new discoveries about the battle – and about themselves.

The Taxi Charity is run by volunteer London licensed taxi drivers and has been supporting hundreds of veterans since 1948. The charity arranges free trips to, the Netherlands, Belgium and France, and days out to museums, concerts, or fundraising events in the UK, to catch up with friends and comrades.

For the last twelve months, pandemic restrictions have meant their events have had to be cancelled so the Charity has made a huge effort to ensure veterans have received regular contact; sending out a greeting card each month, gifts to mark the 75th anniversaries of VE and VJ day, stockings at Christmas and arranging Guards of Honour at veteran’s funerals. Volunteers have also helped with; regular phone calls, food shopping, transport to hospital appointments, and more recently taking veterans for their Coronavirus injections.

To fund and facilitate their work, the charity is reliant on generous donations from members of the public, businesses and trusts.