You are here: Home / News / News / ‘Maritime Jobs at Sea and Ashore’ and ‘Sea Ports for Prosperity’

‘Maritime Jobs at Sea and Ashore’ and ‘Sea Ports for Prosperity’ 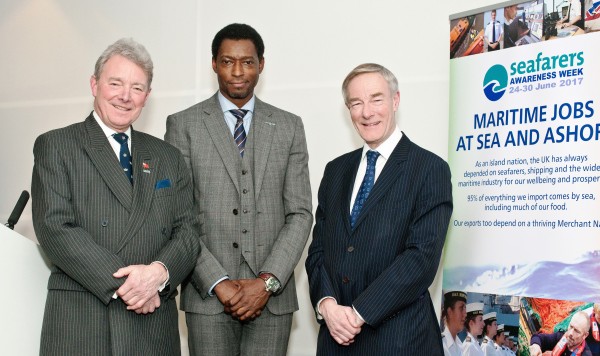 Announcing the themes ‘Maritime Jobs at Sea and Ashore’ and ‘Sea Ports for Prosperity’, Seafarers UK has launched this year’s Seafarers Awareness Week campaign, with the focus on promoting maritime career opportunities, both at sea and ashore, including in the UK’s thriving port industry.

More than 150 maritime professionals came together to celebrate the launch of the seventh Seafarers Awareness Week campaign, organised by the charity Seafarers UK. The week-long campaign will provide a platform for national and regional promotions and events intended to engage media and raise public awareness, with individuals, businesses and organisations working together to raise the profile of jobs within the whole UK maritime industry, including seafaring.

Said Commodore Bryant: ‘Our island nation is dependent on a diverse range of seafarers:

Fishers, deep sea, offshore, and nowadays including those who take to the sea to farm fish.

Skilled workboat skippers and crews, whose services are in high demand in growth areas such as offshore wind power.

Maritime pilots and harbourmasters, providing an essential link between land and sea.

Merchant Navy Officers and Ratings on cruise ships, where the huge number of hospitality workers are now also counted as seafarers.

Superyacht captains and crew members, where our seafarers are a vital part of the UK’s success story in that most buoyant of maritime markets.

‘And finally let’s not forget that the UK and London in particular has a huge requirement for maritime professional expertise, in law, finance, broking and insurance. Those professions need high quality British Master Mariners.

‘So when we talk about promoting Maritime Jobs at Sea and Ashore, and Sea Ports for Prosperity, we see many diverse employment opportunities for men and women, especially talented young people, beyond our traditional Merchant Navy.’

‘We believe it is good for the whole UK maritime world to benefit from raised public awareness of the contribution we collectively make to the UK economy. To do this we will disseminate positive messages about newsworthy maritime activities, from public events and school visits to ports, to college open days and other sources of information about maritime and marine job opportunities.

‘Seafarers Awareness Week is a solid platform on which just about any positive news, campaign or PR activity can be promoted to a media audience that goes far beyond the maritime trade press.’

Maritime individuals, businesses and organisations were urged to support the week by sharing news, engaging on social media and organising events throughout the week.