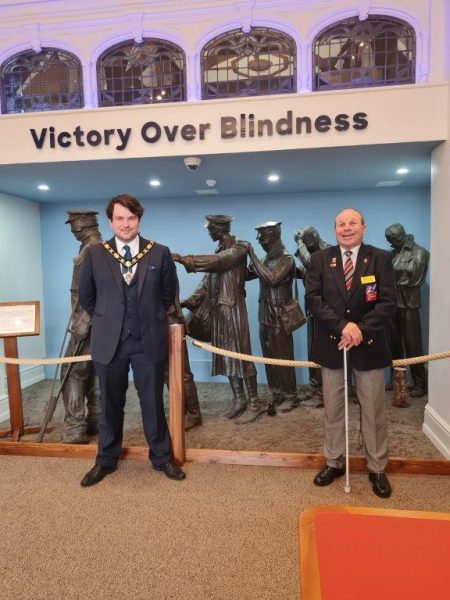 The Mayor was hosted by Billy Baxter – Llandudno’s Town Crier and Vice-President of Blind Veterans UK.  Mayor Saville was given an opportunity to not only to tour the facility, which recently celebrated a decade of providing support to blind veterans, but also to meet and talk with blind veterans and learn more about how the charity’s support has helped them rebuild their lives after sight loss.

“It was a humbling experience, and it is reassuring to know, particularly with Remembrance around the corner, that charities such as this are here to help our veterans regain their independence and purpose after they have done so much to ensure the freedom many of us take for granted”

Blind Veterans UK’s Llandudno Centre is one of three charities set to benefit for the Mayoral Charity Fund this year, along with the National Coastwatch Institution (Great Orme Branch) and the Llandudno Elderly People’s Welfare Society.

Mayor Saville is striving to raise awareness of their work within the local community throughout his networks and looking to raise funds at an event to be scheduled prior to the end of his term.

Anyone wishing to support the Mayor in his endeavours should contact the Mayor via the Town Hall on 01492 879130 or towncouncil@llandudno.gov.uk.