The Mayor of Greater Manchester hailed the ‘tremendous’ standards of care and facilities at the UK’s first Veteran Care Village during a tour of the recently-completed £12.5m development at Broughton House in Salford. 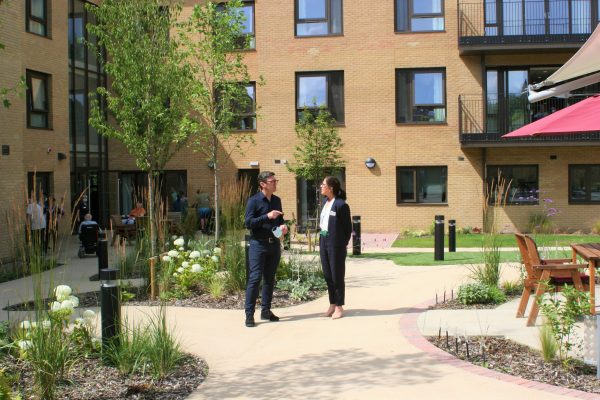 Andy Burnham met residents and staff during his visit to Broughton House, where he was shown round by chief executive Karen Miller.

The Mayor is chairman of the Greater Manchester Combined Authority, which provided part of the funding for the scheme.

He gave a glowing seal of approval to the redevelopment, saying:

“I could not be more pleased by what I have seen. It’s tremendous, I’m very impressed.

“You would want people who have served our country to have the very best that we can offer, and the new Broughton House is THE very best when it comes to standards of care and facilities.

“We are proud as the GMCA to have played our part in helping Broughton House develop a home for the 21st century.”

Broughton House has cared for more than 8,000 veterans since it opened its doors to the ex-service community in 1916.

Its transformation into a modern Veteran Care Village was completed earlier this year. The complex features a 64-bed care home and six retirement apartments for independent living. Facilities include a museum, a gym, hairdressing and barber’s salon and a veterans’ mess.

Broughton House is also home to an Armed Forces Support Hub, which provides welfare support and counselling for ex-service people of all ages living in the local community.

Mr Burnham met Hub manager Jackie Cornmell, who told him the service has seen an increase in the number of referrals, particularly during the pandemic, with 66 in the last 12 months alone.

Mr Burnham met several residents, including World War Two veteran Derrick Corfield, 95, who served in the Merchant Navy and showed the Mayor his medal collection, and David Teacher, 98, who took part in the Normandy Landings on D-Day and later received the MBE for charitable work.

David told Mr Burnham the Care Village was a ‘first-class place to live’.

“It’s fantastic, we are well looked after and well fed,” he added.

“The Greater Manchester Combined Authority has been integral in helping us to create this amazing facility and we are proud that we have in this area the only care home for veterans in the north west.

“Staff and residents were really honoured and thrilled that the Mayor came to visit, taking time out of his busy schedule to tour the facility and meet and chat with them.”