You are here: Home / News / News / Merseyside blind veteran to march at Cenotaph on Remembrance Sunday

Merseyside blind veteran to march at Cenotaph on Remembrance Sunday 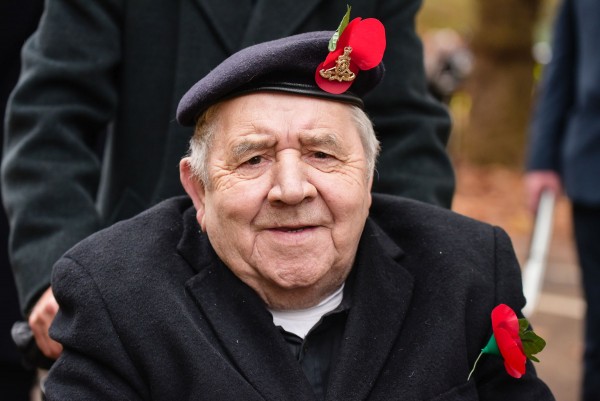 A blind veteran from Merseyside is set to march at the Cenotaph in London this Remembrance Sunday (12/11) with the charity Blind Veterans UK.

Joe, 75 and from St. Helens, will be marching at the Cenotaph in London with more than 100 other blind veterans supported by Blind Veterans UK, the national charity for vision-impaired ex-Service men and women.

Joe, who will be marching for the fifth time, says: “Even before I began marching with Blind Veterans UK, I always watched on TV. It’s an incredibly humbling experience, being there, amongst so many fellow veterans. It’s very emotional too. That being said it’s nice to see so many people supporting such occasions. The entire route is packed on both sides of the road.”

Joe himself served in the Royal Artillery from 28 July 1960 to 28 July 1966. He was stationed in Oswestry, Rhyl and Shoeburyness before spending four and a half years in Germany as a driver. He recalls: “My main role in Germany was driving families to the hospital, mainly pregnant women and children for various kinds of appointments.”

He continues: “I had bad days but they were certainly outweighed by the good. I got to meet so many people in the regiment, including their wives and children.”

It was in 1992, when Joe left the house to take his dog for a walk, that his life would change forever. He explains: “I went out for a walk with my dog and by the time I came back, I was blind in one eye. Within one week, my other eye was the same.”

Joe had suffered a blood clot behind the nerve in his eyes, and he describes his remaining vision as severely limited.

In 2011, Joe was informed of the support that Blind Veterans UK provides. He recalls: “A social worker called and told me that I would be eligible given my Service. We filled in the necessary forms and that was it.”

Reflecting on the impact that the charity has made to his life, Joe states: “Do you know what, I think I’d be dead without them. They’ve given me a new life. Before they came along I was having to rely on my wife for all sorts. It was no good for either one of us.

“They’ve fitted me with a stair lift and that’s made my life an awful lot easier. We’ve been to their training and rehabilitation centre in Llandudno, which was lovely, as well as for some IT training, which was hard!”

Joe is set to march with other vision-impaired ex-Service men and women supported by Blind Veterans UK as part of the national Remembrance Sunday commemorations in London on Sunday 12 November 2017. Specsavers stores across the UK will be fundraising from 6 to 12 November on behalf of Blind Veterans UK to help Joe, and others like him, march at the Cenotaph.

If you, or someone you know, served in the Armed Forces or did National Service and are now battling severe sight loss, find out how Blind Veterans UK could help by calling 0800 389 7979 or visiting blindveterans.org.uk/.