Mesothelioma UK has signed the Armed Forces Covenant demonstrating the charity’s long-term commitment to the military community in the UK, as part of its ‘Supporting our Armed Forces’ project.

The Armed Forces Covenant is ‘a promise by the nation ensuring that those who serve or who have served in the armed forces, and their families, are treated fairly’. By signing the Covenant, Mesothelioma UK is formally committing to uphold the key principles and recognise the value that the Armed Forces community brings to the country. 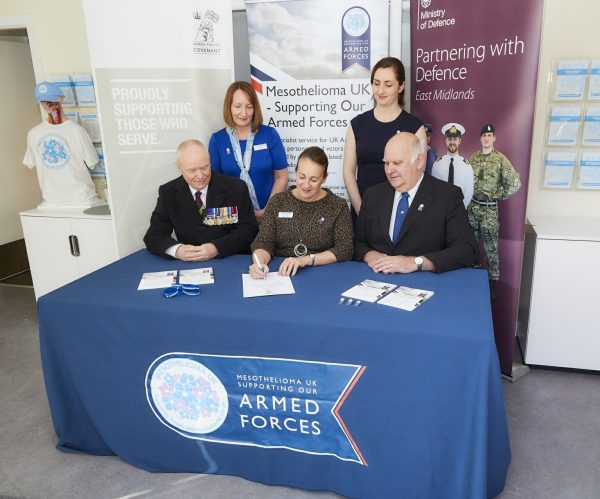 Development of Mesothelioma UK’s Supporting our Armed Forces project is supported by Government funding from fines levied on the banking industry for manipulating the LIBOR rate (the London inter-bank lending rate). As part of the project, an Armed Forced Benefits Advisor has been employed to help clients to navigate the complex system of claiming compensation and accessing benefits – a system that is different to that for civilians. A dedicated Armed Forces Clinical Nurse Specialist has also been appointed.

A comprehensive research programme is nearing completion that will provide a broad insight into the impact of mesothelioma amongst our Armed Forces and veterans. Mesothelioma UK is also collaborating with an increasing number of Armed Forces organisations to pool its resources and reach those veterans and armed forces personnel who need support.

“We are delighted to have such an important charity as Mesothelioma UK on board with the Armed Forces Covenant. They are already providing direct support to members of the Armed Forces affected by asbestos cancer, but they have also made clear by their actions and policies that they intend to support our wider Armed Forces community, and we are very grateful for their support.”

“Our Supporting our Armed Forces project has gone from strength to strength and we’re delighted, through signing the covenant, to formally commit long term to supporting the Armed Forces community”