You are here: Home / News / News / Mum and son tandem skydive for SSAFA in memory of Black Watch Veteran Rab

Blairgowrie resident Connie Sharpe, 41, has a direct way of making sure she carries through her tandem skydive for SSAFA, the Armed Forces charity on 15 May:

“The more I can raise, the less chance there is of me chickening out!”. 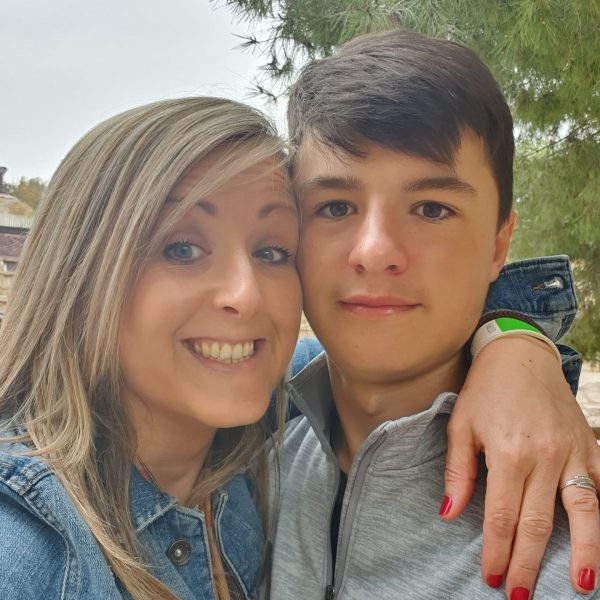 Chickening out, however, will be the last thing on Connie’s mind because she is making the skydive for SSAFA in memory of her late father, Robert “Rab” Davidson, who served in the Black Watch for more than 24 years, dying suddenly in May 2019.

And while that is enough reason for anyone, she has the added impetus of making the leap – assisted by Skydive St Andrews at Fife Airport – with her son, Cormac, who turns 18 just days before.

As Connie, a Credit Controller with A Proctor Group, said:

“Anyone who knew Dad, Cormac’s granddad, would say what a character he was and that his two passions were his family and the Black Watch. It’s always been on my bucket list to do a tandem skydive, so I thought this is the perfect time to do one in memory of Dad, and better still, I won’t be doing it alone.

“I think Dad would be proud of what we’re doing for SSAFA, and that we’re trying to raise as much as possible for it.

“When Dad passed away, everyone at SSAFA Perth & Kinross was so supportive to us all – especially my mum – helping us through such a tragic time, so this, as well as the many close military ties in my family and beyond, meant it just felt right to support this branch of SSAFA.”

Connie said she feel it is a “sad truth” that veterans lack the support they need after serving and fighting for the UK, adding:

“But SSAFA tries hard to change this by helping our servicemen and servicewomen – our unsung heroes – back into Civvy Street and supporting their families in times of need.”

Cormac, a golfer who has represented Scotland on many occasions, is in the Scottish Boys Team, and will head out to USA in August to start his golf scholarship with Minnesota University.

“Granddad was my number-one fan. He was so supportive of everything I did and was so chuffed with how my golf was progressing. I feel that with Mum and I doing our skydive this is the perfect opportunity to do something in memory of Granddad and raise funds for such an amazing charity.

“This is our turn to give back and I know Granddad would be very proud of us.”

The last word goes to Connie, who said:

“We had originally set a target of £500 and smashed this within days through the generosity of our kind family and friends. Therefore we decided to increase this to £1,000 and though we know times are hard for so many just now, anything you can spare to support our skydive and raise as much as possible will be so appreciated by us, by SSAFA Perth & Kinross, and I think by Dad.”

To support Connie and Cormac on their skydive, visit their JustGiving page here.