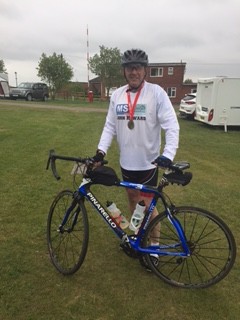 In early February 17 my brother asked me if I would accompany him on a high profile ‘Sportive cycle event’ where he and some friends intend to raise awareness for Blesma, knowing I was not very experienced at cycling I hesitantly agreed. He then told me the ride was 100 miles through the Lincolnshire countryside and will take place on the 6 May so I would need to get my skates on and start training. My initial thoughts were, ‘nightmare, what have I let myself in for’. Training for the event was always going to be difficult, balancing it with work and the inclement weather, more importantly, I didn’t have a bike. My son generously loaned me his ‘Time Trials bike’, I bought a Turbo Trainer and set them up in my conservatory where I could get used to the bike without embarrassing myself on the roads and for somewhere to train during the bad weather.

At first, I could only manage 30 minutes on the bike before I went completely numb from the waist down. As the weeks passed I was able to manage two sessions a week and got my timings up to 1 hour before getting too numb. I then decided; if I’m going to put myself through this I would like to use the event to raise funds for Mutual Support, after all it was them who assisted and gave advice to me and my wife when she was diagnosed with Multiple Sclerosis in 2009. We found benefit from attending an annual weekend meet receiving information by the visiting lecturers and others who attended the annual weekends. These events require funding and my aim was to raise enough money to allow someone else to benefit from these meets and further research into Multiple Sclerosis. Seeking as much advice from experienced riders I was instructed to get some decent padded shorts (a must), shoes and a helmet. Prior to the event I was only able to get out on the road for four rides, a 20 miler, two 25 milers and a 50 mile. 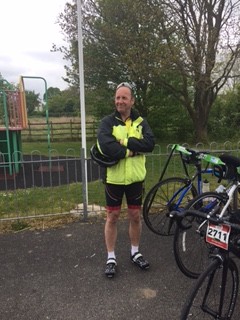 I was struggling with the bike I was using at around the 20 mile point, the seating position meant the bike was built for speed and not distance and was causing a great deal of back pain. I managed to borrow another bike and collected it the day before the event so there was no time to get familiar with it and any training on it was going to be the actual event. Registration was at 0730hrs on the day and we set off at 0820hrs. Initially the route started off on flat ground but the wind was quite strong where it remained in our faces all the way around the route. Although the weather was cloudy the wind kept the rain away which was a small mercy. The hills started to rise slowly at around the 15 mile point and never seemed to let up. The feed stations were well administered with energy bars, cakes and drinks and set up at the 25, 50 and 75 mile points. All were a welcome rest. There were differing classes of riders, I would class myself as a complete beginner peddling like mad and then there were the experienced guys who seemed to glide past hardly peddling, I found this particularly frustrating. Just after the 25 mile point I started to shuffle around in the saddle as it became more and more uncomfortable. The wind was causing havoc with most riders and there were a few accidents with colliding bikes and pot holes, happily there were no serious injuries.

The main hills started at the 60 mile point some were soul destroying, just as you thought you were at the top of one, another appeared, they certainly appeared to be more up hills than down. As we approached the 100 mile point, feeling chuffed with ourselves there was no sign of the finish line, we started to question our navigational skills, and then it appeared another 4 miles on. It was a great feeling crossing the finishing line and checking in, thank heavens we had finished and we could enjoy a well deserved beer or two. We were presented with the finishing medals and our overall time was 8 hours 30 mins. Total funds raised £805 and £996.25 with gift aid.