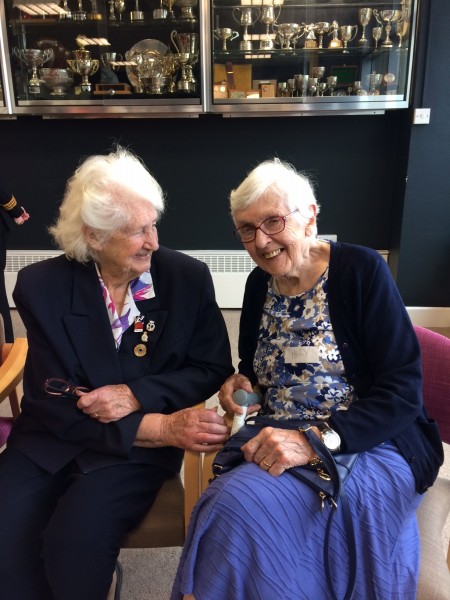 A blind veteran from Oxfordshire enjoyed a special trip to Brighton from 15 – 20 May where she met a fellow veteran who served at Bletchley Park at the same time as her.

While staying at Blind Veterans UK’s training and rehabilitation centre in Brighton, Mary met another veteran called Lorna Cockayne, who was also based at Bletchley Park during the war.

Mary says: “I really enjoyed my week in Brighton. It was lovely to meet Lorna and all of the other female veterans and chat about being a woman in the Armed Forces. We had a formal lunch with some Army and Navy women too and it was really interesting to hear their stories.”

Mary joined the Auxiliary Territorial Service of the Army in October 1943 and served throughout the Second World War. Mary had a degree in German and French from Oxford University so she could understand the two languages. This skill led to her being stationed at Bletchley Park, where she translated and scanned decoded German messages. 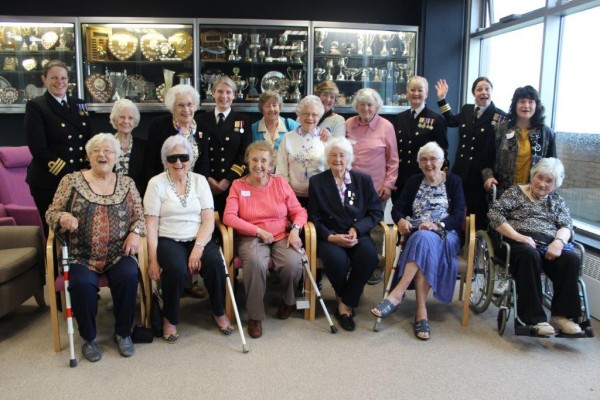 Mary says: “I actually had a very boring time at Bletchley Park! Scanning the German messages wasn’t as interesting as it sounds. It always amuses me when anyone assumes that it must have been exciting. It was important work but it wasn’t much fun.

“The best part of my time in the Army came after the end of the Second World War. When Bletchley Park was closed I was sent to Berlin and that was a really interesting place to be.”

Lorna, 92 and from Dorset, served as a Wren at Bletchley Park from 1944 – 1947 where she was involved in the codebreaking of German messages. Lorna was one of the 600 Wrens who served at Bletchley Park during the Second World War. Lorna started to receive our support in October 2016.

Mary says: “Every girl wanted to serve in the Wrens because they had such a lovely uniform! I was on their waiting list initially but obviously went into the Army instead. Meeting other veterans like Lorna really helps you put the pieces together.”

Lorna says: “Blind Veterans UK has given me my independence again. They’ve given me so much help and equipment. It’s brilliant. I’ve really enjoyed Women’s Military Week and to be given the chance to meet Mary, who worked at Bletchley Park at the same time as me, is brilliant.”

It was 50 years after Mary was discharged from the Army in 1946, that she started to lose her sight. She had always worn glasses and went for regular check-ups. It was at one of these regular visits to the optician that Mary was told her she had age-related macular degeneration and that nothing could be done to stop her sight from getting worse.

Fortunately, Mary’s daughter took her to an open day hosted by the Oxford Association for the Blind. They asked Mary if she had served in the Armed Forces and encouraged her to contact Blind Veterans UK. Mary started to receive the charity’s free support in August 2016.

Mary says: “When you’re blind it is small things that can make a huge difference. Blind Veterans UK have given me fantastic free equipment to help me around the house. I have equipment that means that I can now make a cup of tea and tell the time. I even have talking scales to use when cooking.”

Mary has been to Blind Veterans UK’s training centre in Brighton before where she was introduced to all the free support the charity offers.

Mary says: “The Blind Veterans UK centre in Brighton is wonderful. I have visited before for IT training, which was very helpful. The charity has even given me a voice-operated tablet, which they are teaching me how to use. I’m grateful to Blind Veterans UK because they have given me some of my independence back.”

Women’s Military Week this year ties in with events that are happening all over the country to celebrate 100 years of the Women’s Royal Naval Service. This was the women’s branch of the Royal Navy founded in 1917 and it remained active until it was integrated into the Royal Navy in 1993.

Blind Veterans UK currently supports more than 120 Wrens and research from the charity estimates that there could be as many as 2500 blind former Wrens in the UK who are eligible for the its support, most of whom are not aware of it.

The charity estimates that there are currently 535 blind veterans in Oxfordshire that would be eligible to access its specialist support, most of whom are not currently aware of it.

If you, or someone you know, served in the Armed Forces or did National Service and is now battling severe sight loss, find out how Blind Veterans UK could help by calling 0800 389 7979 or visiting noonealone.org.uk.

Blind Veterans UK estimates the number of Women’s Royal Naval Service veterans (Wrens) living with severe sight loss in the UK to be around 2,500. This is based on available intake figures from the Ministry of Defence from 1939 to 1993, of which an average 23% served in the WRNS. RNIB blindness prevalence rates on the number of women in the UK with severe sight loss are then applied to reach an estimated figure.