A tribute garden has been planted to commemorate a century since the formation of the Women’s Royal Naval Service. The new floral design describes the anniversary and was planted by a Royal Navy working party assisting the city council.

This project came about through a conversation with the former Lord Mayor’s consort and Councillor Brian Vincent. He was keen to support the National Centenary celebrations of the formation of the Women’s Royal Naval Service in 1917 and knew there were gardens around the City of Plymouth used for such purposes.

The garden in Armada way was selected and the organisation began with the council gardeners and Royal Navy with the support of Babcock Boathouse joinery team with the help of engravers to design and deliver a memorable garden and plaque for the ‘Pioneers to Professionals’ WRNS100 celebrations this year. It is a fantastic recognition of 100 years of Women in the Navy by the City of Plymouth and will be a permanent reminder of this strong bond.

Lt Jenny Ruscoe, the key coordinator for this great opportunity, secured five sailors from HMS Raleigh, who have just passed out of initial training and had a day to help whilst waiting to go to their specialist training and a steward whose former ship is HMS Somerset, to join her for a day to dig and plant the beds with the council gardeners totally transforming the area appropriately by the HMS ARK ROYAL anchor.

A former WRNS Officer, Jacqueline Clink, whose husband is Flag Officer Sea Training, helped with some of the planting and liaising with the Lord Mayor’s office from the start. The grand opening of the garden was on the 19th June 2017, the start of Armed Forces week. A 97 year old former Wren, Joan Carol Picton nee Roe, joined several dignitaries to cut a ribbon to officially open the garden. 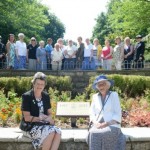 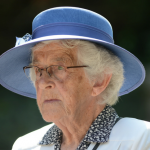 Joan Picton who joined the WRNS IN 1939 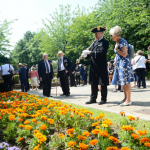