A new podcast has launched exploring the history and legacy of the Guinea Pig Club, a group of airmen who suffered life-changing burns and injuries during the Second World War. The three-part mini-series has been created by the RAF Benevolent Fund to celebrate the 80th anniversary of the Club and to ensure its legacy lives on. 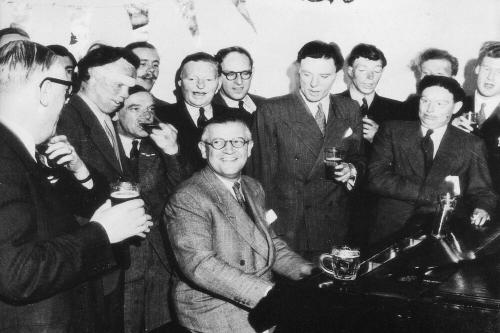 Originally founded as a drinking club, the Guinea Pig Club took its name from the pioneering surgery they underwent at the Queen Victoria Hospital in East Grinstead under Sir Archibald McIndoe. McIndoe’s hospital became renowned around the world and his techniques went on to inspire modern plastic surgery. Crucially, McIndoe focused on healing not only patients’ physical scars, but their emotional wellbeing too. Today, there are only six members of the Club still with us.

In the first episode of the mini-series, historian Victoria Taylor explores the story of the Club and hears first-hand accounts from those who set it up. She interviews Andrew Perry, the son of Jack Perry, the youngest member of the Guinea Pig Club. Jack suffered 80 per cent burns to his hands, face, and ears when his Halifax bomber exploded.

“The camaraderie of the Guinea Pig Club was a huge help for my dad. McIndoe gave his patients the necessary mental tools to deal with their injuries, which had an enormous impact on them psychologically. And thanks to that positive attitude, the Guinea Pigs were much better equipped to deal with their situations and go on to live fulfilling lives.”

Victoria also speaks to Dr Emily Mayhew, a military medical historian specialising in the study of severe casualty, its infliction, treatment, and long-term outcomes in in 20th- and 21st-century warfare.

“If you want to know how to treat military veterans who are dealing with the lifetime consequences of injuries sustained during warfare, then all the answers to your questions are right there in the history of the Guinea Pig Club.”

The Guinea Pig Club mini-series is the RAF Benevolent Fund’s third series of its All Stations podcast and can be listened to at rafbf.org/allstations, on Apple and Google Podcasts, Spotify, or your preferred podcast app.

The RAF Benevolent Fund is proud to have supported the Guinea Pig Club and many of its members over the years and continues to support some members today.