Thomas Appleby, 93 and from Heaton, received the award at the Blind Veterans UK Founder’s Day Awards which were held at the charity’s training and rehabilitation centre in Llandudno.

Thomas says: “It was a great honour to win the award and was very much the icing on the cake”. 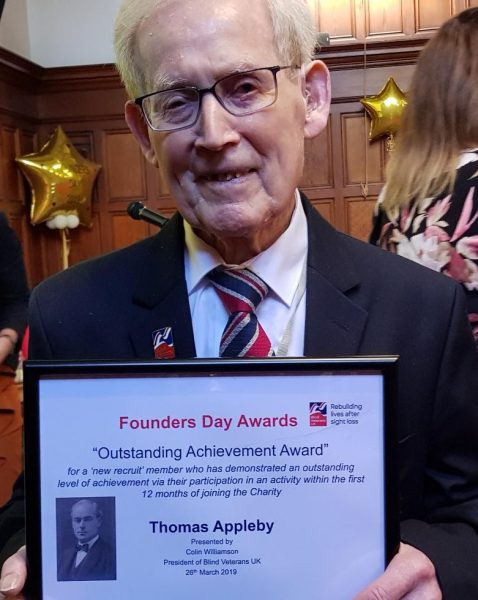 Thomas, who is known as Tommy, was nominated by Saran Bilcliffe, Community Support Worker in the North East community team at Blind Veterans UK. He has been awarded for rediscovering his love of reading and creative writing, as well as for this efforts in promoting the charity by speaking at schools and by participating in a project run by the local Discovery Museum in Newcastle. In her nomination proposal, Saran said:

“When Tommy first started to lose his sight he also started to lose all his confidence. He had always been a very sociable and active man and had many hobbies such as dancing and creative writing. His life had changed considerably for the worst. However, Tommy really has thrived since he started receiving support from Blind Veterans UK and fully embraced what was on offer. He is one of the most positive, happy and spirited gentleman you could ever meet. His positivity and all that he has achieved is an inspiration.”

With the help of a magnifier, provided to Thomas by the charity, he is able to continue writing stories, he goes out dancing regularly with his friends and hopes that his story can support others. Thomas says: “I get more satisfaction out of helping others. I’m no expert, but I’ve been there myself, thinking that nothing will be the same. You learn to adapt though and I now live the life I always lived before my sight loss”.

“Every year we recognise the achievements of veterans like Tommy who have really demonstrated the values we hold as a charity. Tommy, along with the other nominees and winners, are the shining examples of all that can be done to achieve victory over blindness.”