Over the years the Small family has been a powerhouse of fundraising for SSAFA, the Armed Forces charity. Jamie, 14, has been formally acknowledged for his efforts in the BBC Make A Difference awards. He is one of four to be shortlisted in the Fundraising category. 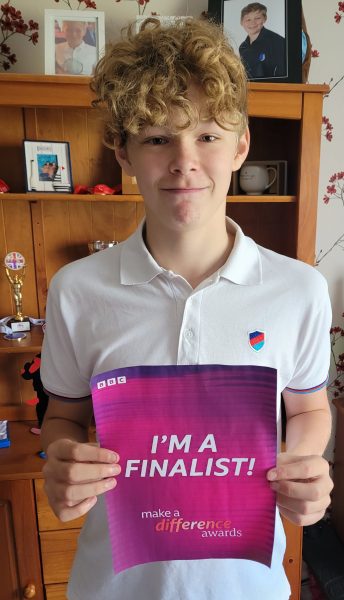 The awards celebrate those who spend their time doing something to make life better for others, which is what Jamie does through his fundraising activities for SSAFA.

Following in the footsteps of his mother, Jamie has taken the baton to fundraise for SSAFA after the charity was there to support them after his father, Chris took his own life. Chris served for 21 years in the Royal Logistics Corps as a chef and struggled with the transition into civilian life.

SSAFA were able to provide vital practical assistance and emotional support. The charity helped with funeral costs and arranged for Jamie to receive bereavement counselling to help him cope with losing his father.

This isn’t Jamie’s first nomination. He was named Inspirational Young Person of the Year in Suffolk’s Raising the Bar awards after organising a SSAFA Fun Day at his school raising almost £6,000. He also won the Family Values category at the Soldering On awards in 2019.

To find out more about Jamie’s exceptional work visit: https://www.ssafa.org.uk/about-us/ssafa-stories/mandy-and-jamie-small