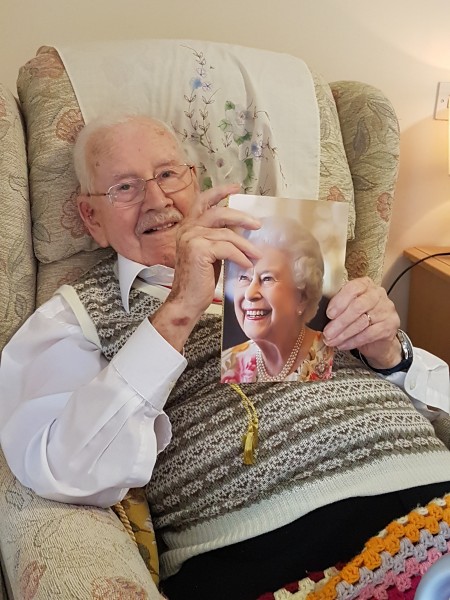 On the launch of this year’s Poppy Appeal, former Royal Engineer and Normandy veteran, Ron Trenchard celebrated his 100th birthday.

Born in Highbury, North London on 26th October 1917, Ron spent his milestone birthday with family and friends at a party organised for him by The Royal British Legion’s Galanos House staff where he now resides.

The son of an Army Clerk, Ron moved to Warwickshire with his family in 1937 and soon enlisted in The Royal Engineers at the age of 22 when war broke out. He was part of the British Expeditionary Force and served in various Docks Operating Companies taking supplies off ships. At the time of Dunkirk he was in Le Havre in France, however the ships left the area without the men and Ron was posted as missing for three weeks. During that time Ron had made his way to Brest and hitched passage on a ship sailing back to England.

After his great escape from France, Ron was posted to Egypt where he stayed until 1943, working on the Suez Canal. Unfortunately, during this time, Ron’s father died from complications with appendicitis and Ron was allowed home on leave, which is when he also married his late wife, Elsie May Rodenhurst.

Upon his return to service, Ron then found himself training for the D-Day landings and went into France on Gold Beach. He spent six months at Arromanches, taking supplies off the Mulberry artificial harbours. He then served in the Port of Antwerp and finally in Lubeck in Germany after which he was discharged.

Today, Ron is a resident of the Legion’s Galanos House care home, which like every one of its six care homes, are exclusive to ex-Service people and their dependents. Ron’s three children Michael, Diane and Richard, four grandchildren, and three great grandchildren, along with friends and staff at the care home celebrated in style for his 100th year with a party and an afternoon tea.

Mike Trenchard, son of Ron said: “We are all so proud of Dad and his achievements. He has been thrilled to be made such a fuss of and we as a family are very touched by the effort by staff at Galanos who are absolutely fantastic in providing my Dad with day-to-day care and assistance.”

Ron has also received a telegram from the Queen congratulating him on his 100th birthday, which will go alongside his 60th anniversary telegram that Ron and his wife received in 2003.