A blind veteran from Pickering in North Yorkshire is “delighted” to have had her painting ‘Inspired by Buttermere’ featured in military charity Blind Veterans UK’s annual exhibition fundraiser. 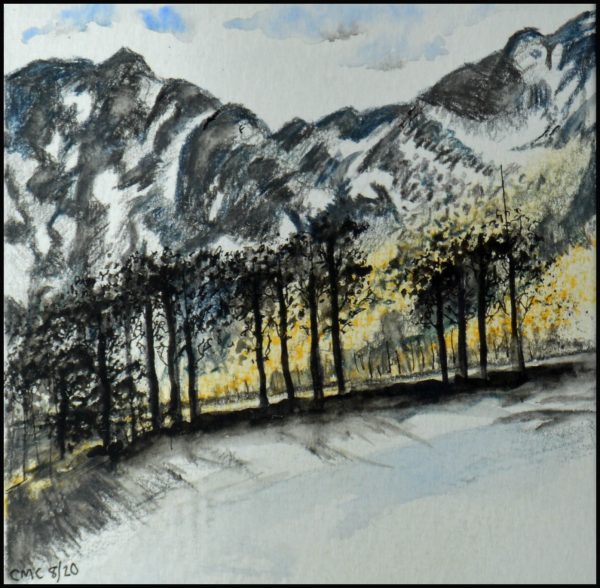 In a normal year the exhibition would have been hosted at the charity’s rehabilitation and training centre in Brighton, however this year it has been taken online with the auction being hosted on eBay.

Following the theme of ‘Landscape’, 63-year-old Christine Collins’ entry is based on a photograph her son took of a Lake District landscape, completed in watercolour.

“My eye condition means that I struggle to see large areas at the same time. My central vision is not too bad though so I paint on a small canvas which makes it easier to see and concentrate.

“Before my sight severely worsened I was really into art but then I lost interest. Blind Veterans UK got me back into it at their Llandudno rehabilitation centre and then set me up with an art station at home. Then this opportunity came up during lockdown and I had to take it.”

Christine entered the RAF in 1977 and spent seven years as a Clerk where she fondly remembers organising flying courses for the Jaguar Squadron.

It was later in life at the age of 53 that a genetic condition that she had had since birth, Retinitis Pigmentosa, suddenly revealed itself and caused a rapid deterioration in her sight.

Luckily, she found out about Blind Veterans UK, who have been supporting her since. She says:

“The best thing I ever did was join the RAF as it allowed me to receive support from Blind Veterans UK, who have been absolutely marvellous.

“I honestly don’t think I would have survived without them. I’ve done cookery courses which have taught me how to prepare food safely and been taught how to use a tablet which enables me to stay in touch with friends and family.

“Even during lockdown they’ve set up phone calls with other blind veterans in the local area. It’s great to talk to people in the same position as yourself.

“It’s seriously scary when you start to lose your sight. But I no longer feel afraid with Blind Veterans UK behind me.”