A blind veteran from Northumberland has received the Life Beyond Sight Loss award from the military charity Blind Veterans UK to recognise his outstanding achievements in sport.

Andy Bache, 45 and from Wooler, received the award at the Blind Veterans UK Founder’s Day Awards which were held at the charity’s training and rehabilitation centre in Llandudno last week.

“I feel shocked to have received the award but very humbled”.

Andy was nominated by Jo Cliff, Community Support Worker in the North East community team at Blind Veterans UK. He has been awarded for rediscovering his love of sport and for taking on a number of sporting challenges despite his sight loss. In her nomination proposal, Jo said:

“Andy used to box for the army and also used to dive and swim for Southampton. Prior to losing his sight, he was running 10 miles every morning. It was devastating for Andy to believe all this was lost. So, new goals were set. With the support of colleagues at Brighton Centre, Andy is now back in his local pool. It is inspiring to reflect on his year of personal successes and achievement, as well as his courage and commitment to ‘dig deep’ and rebuild his life”.

As well as his sporting success, Andy has been attending IT classes and developing his skills. Andy says:

“I hope to go to university to study Psychology next year and then hope to complete a masters in Counselling. Blind Veterans UK will supply me with a laptop for my studies. The opportunity to go to University is all thanks to Blind Veteran UK – I was lost before I found them”. 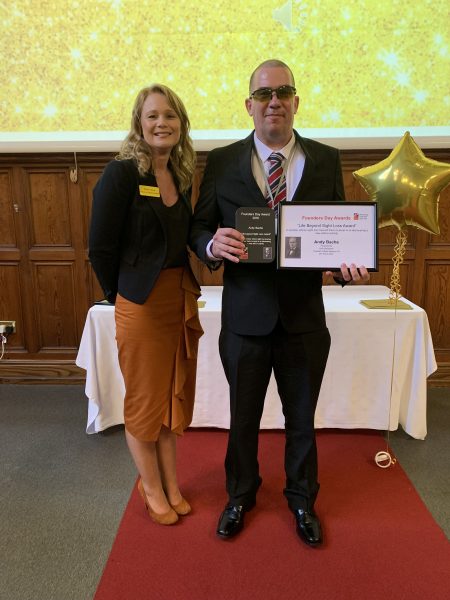 “Our Founder’s Day Awards are the highest honour Blind Veterans UK gives to the veterans we support.

“Every year we recognise the achievements of veterans like Andy who have really demonstrated the values we hold as a charity. Andy, along with the other nominees and winners, are the shining examples of all that can be done to achieve victory over blindness.”