You are here: Home / News / News / Nuclear Races partnership with Blesma, The Limbless Veterans goes from strength to strength

Nuclear Races partnership with Blesma, The Limbless Veterans goes from strength to strength 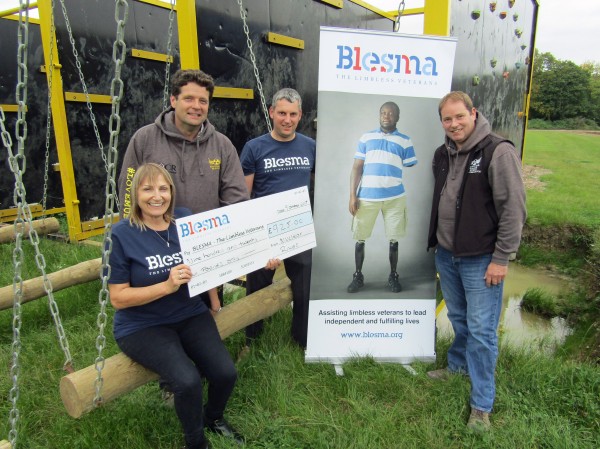 Representatives from the team at the Nuclear Races in Kelvedon Hatch, and military charity Blesma’s fundraising team met recently for a cheque presentation. The Nuclear Races donated £5 for every runner that took part in the Blesma Wave raising an excellent £925.

The total amount raised from the 185 Team Blesma runners over the event including the Nuclear Races was an incredible £15,721!

Following from this year’s success, the teams at Nuclear Races and Blesma are proud to announce a continuation into 2018, with the Blesma Wave of the Nuclear Rush weekend starting at 1240hrs on Saturday 19 May 2018.

Race Director at Nuclear Races, James Parrish, says: “It gives me a great deal of pleasure to support such a worthwhile and important charity. I have a lot of time and respect for the people with disabilities who complete the course, they may take a bit longer to finish but they are the real heroes. We look forward to really successful event in 2018 with Blesma as our chosen charity.”

Associate Director of Fundraising, Barbara Warner, says: “2017 was an excellent year for Nuclear Races and Blesma, and we are really looking forward to working together again in 2018 to build on this year’s success. Thank you to everyone at the Nuclear Races for their continued support!”

Blesma, The Limbless Veterans is the national charity for all limbless service men and women, their widows and dependents. It was formed in the years following the First World War and became a national charity in 1932