Officer raises over £3,000 by cycling 900km from Glasgow to London

Lt Cdr Doc Cox, UK Armed Forces Director of Rugby, has raised over £3,000 for SSAFA, the Armed Forces charity and NHS Charities Together by completing an epic cycle ride from Glasgow to London. 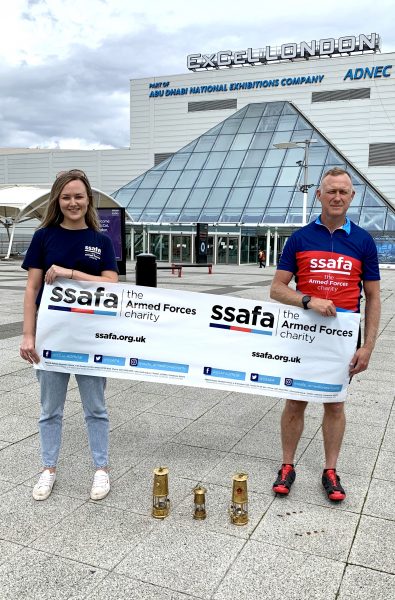 Lt Cdr Doc Cox, alongside his team, travelled over 900km from Glasgow SEC (NHS Louisa Jordan) to the NHS Nightingale Hospital at the Excel in London, to raise money for SSAFA and NHS Charities Together.

Doc began his cycle on Friday 25 June from Glasgow SEC and then cycled 77.7km to Edinburgh Castle. From Edinburgh, Doc cycled via the following locations:

Doc recently received his 2nd Long Service and Good Conduct Bar after 38 and a half years’ service, joining the Royal Navy in June 1984. However, Doc has always had a strong connection with rugby, even when on operation. In 2008, he helped coach the inaugural Afghanistan national players, then in Tanzania, Ukraine and more recently, Nigeria, has been out on the training paddock, helping to develop local sides and players. In 2019, he took on the role of Director of Rugby for the UK Armed Forces Rugby team.

Doc completed his cycle on Monday 5 July at Excel London after cycling 906km from Glasgow to London.

“We are incredibly grateful to Doc and his team for taking on this epic challenge and cycling over 900km from Glasgow to London to raise money for SSAFA. The money raised by Doc will make a real different to the lives our beneficiaries, including service personnel, veterans and their families. Thank you.”

If you would like to support Doc, visit https://uk.virginmoneygiving.com/DoRNightingaleChallenge