You are here: Home / News / News / Officer takes on epic 840km cycle to raise money for SSAFA and NHS Charities Together

Lt Cdr Doc Cox, UK Armed Forces Director of Rugby, will be taking on an epic 840km cycle from Glasgow to London in just 10 days to raise money for SSAFA, the Armed Forces charity and NHS Charities Together. 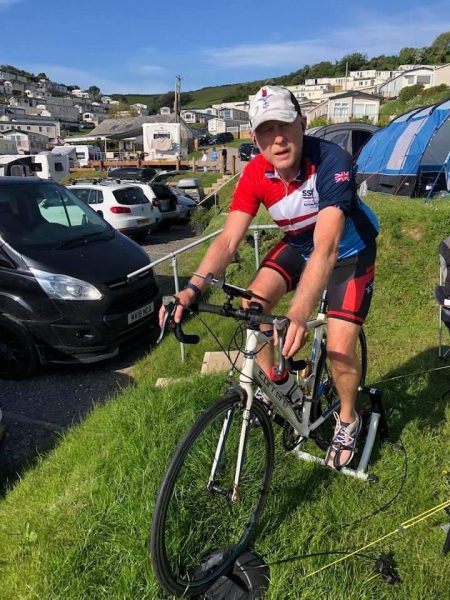 Lt Cdr Doc Cox, alongside his team, will be travelling 840km from Glasgow SEC (NHS Louisa Jordan) to the NHS Nightingale Hospital at the Excel in London, to raise money for SSAFA and NHS Charities Together.

Doc will begin his cycle on Friday 25 June from Glasgow SEC and then cycle 77.7km to Edinburgh Castle. From Edinburgh, Doc will cycle via the following destinations:

Doc recently received his 2nd Long Service and Good Conduct Bar after 38 and a half years’ service, joining the Royal Navy in June 1984. However, Doc has always had a strong connection with rugby, even when on operation. In 2008, he helped coach the inaugural Afghanistan national players, then in Tanzania, Ukraine and more recently, Nigeria, has been out on the training paddock, helping to develop local sides and players. In 2019, he took on the role of Director of Rugby for the UK Armed Forces Rugby team.

Doc will be supported on his 840km route by Nathan ‘Pony’ Moore. Pony joined the Royal Navy in March 200 and has served on HMS Quorn, HMS Newcastle, HMS Manchester, HMS Edinburgh, and HMS Diamond, as well as shore appoints with HMS Collingwood, Navy Command HQ (Portsmouth) FLEET IS Support Unit and most recently, the Overseas Patrol Squadron HQ.

“I wanted to do something to say ‘thank you very much’ to the NHS for all that they’ve done during Covid-19 over the last 12 to 16 months, and also to SSAFA for the support that they’ve given families during this incredible unprecedented time.”

“I suppose you can tie that also into the fact that servicemen and women last year were paramount in building the Nightingale centres. It’s a way of saying thank you to them/”

“I am excited to be taking on this challenge for two incredible charities: SSAFA and NHS Charities Together. It will be incredibly tough as I attempt to cycle 840km in just 10 days, but it will be worth it when I reach NHS Nightingale in London on Sunday 6th July.”

The cycle challenge is estimated to take 10 days, beginning on Friday 25 June, and finishing on Sunday 6 July at the NHS Nightingale Hospital at the Excel in London.

If you would like to support Doc and his team raise money for SSAFA and NHS Charities Together, please visit: https://uk.virginmoneygiving.com/DoRNightingaleChallenge