You are here: Home / News / News / On the 75th Anniversary of VJ Day, The Taxi Charity for Military Veterans delivering commemorative tins to Veterans

On the 75th Anniversary of VJ Day, The Taxi Charity for Military Veterans delivering commemorative tins to Veterans

To mark the 75th anniversary of VJ Day on Saturday 15 August, the Taxi Charity for Military Veterans  delivered specially commissioned VJ Day commemorative tins, filled with sweets and a miniature or two, to WWII veterans. 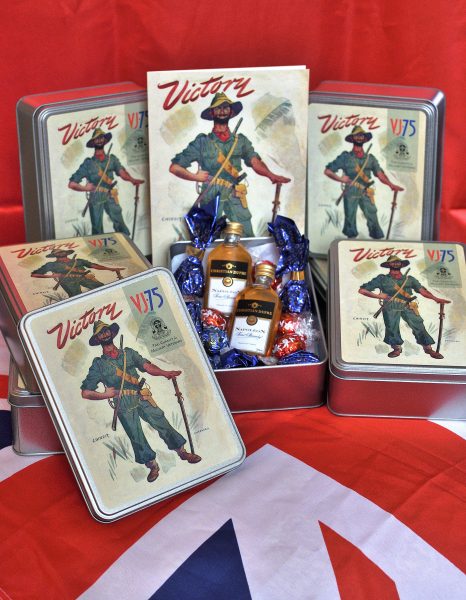 The charity delivered tins earlier this year to commemorate the 75 anniversary of VE Day and received so many phone calls from veterans thanking them for thinking of them during lockdown that they wanted to replicate the idea for VJ Day, for all their WWII veterans including those who served in the far east and are often known as the “forgotten fleet” or “forgotten army.”

“The Taxi Charity had a commemorative VJ Day tin specially designed for WWII veterans for the 75th anniversary featuring a work by war artist Thomas Dugdale. The tins are being delivered to local veterans by volunteer London Cabbies and the tins for those who live further away have been posted. With most VJ Day events having to be cancelled, it is our way of letting all our WWII veterans know we are thinking of them on this very important anniversary.”

The picture of a “Chindit” on the tin was painted by Royal Academy war artist Thomas Dugdale and the original image was given to Mr and Mrs Goodwin by Captain Maurice Wiggal from the 6th (Queen Elizabeth’s Own) Gurkha Rifles. This beautiful illustration appeared on the 28th May 1945 cover of ‘Victory’ the weekly for India Command. The name ‘Chindit’ was suggested by Captain Aung Thin, DSO of the Burma Rifles. Chindit being a corrupted form of the Burmese mythical lion-like creature, Chinthé or Chinthay, which traditionally guarded Buddhist temples.