A free concert to mark HM The Queen’s Platinum Jubilee – held on June 2 in Perth’s stunning concert hall – to kick off the area’s Jubilee events has raised more than £2,000, double the estimate, to continue SSAFA, the Armed Forces charity’s work in Perth and Kinross. 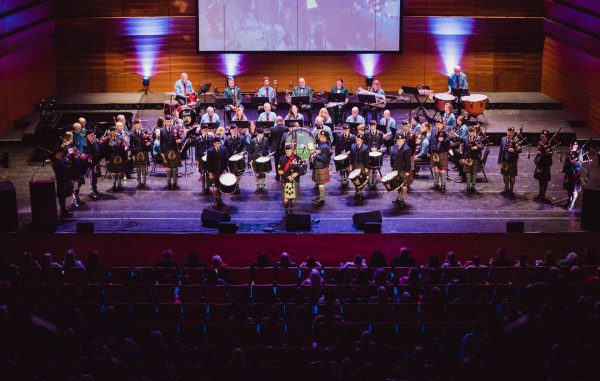 A team of 12 SSAFA friends and volunteers – headed up by Caseworker Richard Barker, a former Queen’s Own Highlander, and Branch Secretary Angela Watson – took astonishing donations from happy concertgoers as they left the show to watch beacons being lit all over the area.

The sell-out performance – the free tickets were booked in advance – saw the 1,100-seat auditorium full for a concert boasting more than 120 performers aged from four to 85 for two hours of song, music, prose, and dance that was organised with military precision.

This is not surprising as former British Army Director of Music Major Kevin Lamb and former King’s Own Scottish Borderer Andy Middlemiss, who is Branch Chairman, and ex-Black Watch Pipe Major Alastair Duthie, with his Perth and District Pipe Band, ran the show. The climax was a very moving rendition of Highland Cathedral with the pipe band and Capital Concert Band, leaving many unashamedly moved to tears.

Of the concert, Andy said that It was a

“… fabulous, inspiring, moving show… absolutely loved putting it together with Kevin, all the fabulous performers, Perth and Kinross council and Concert Hall staff. The Lord Lieutenant’s agreement that we should fundraise for SSAFA was my added incentive to make it a cracking good show for Her Majesty. A joy to help run it” before relaying some of the tributes and testimonials from concertgoers.

“Awesome and fabulous. What a wonderful evening of entertainment. Many congratulations on arranging such a fantastic event. I was foot tapping all night and Highland Cathedral had the hairs on my neck standing to attention.”

“Great concert! Really enjoyed the variety of talent , the story of the Queen’s life and love of Scotland and its music. Well done! Thanks for the great seats, which my 93-year-old friend really appreciated.”

“Two hours of unadulterated pure joy. I can never thank you enough for this wonderful evening hat II will not be forgetting in a hurry. Thank you much more than I can ever say for this most splendid and original of Scottish treats.”

And from former Lord Lieutenant of Perth and Kinross, Sir Melville Jameson, who said:

“The Platinum Jubilee Concert last night was quite simply a triumph, my warmest congratulations! It was a most enjoyable evening – great acts – great music – such talent – expert narration- a stunning show. A very fitting way to herald the Platinum Jubilee celebrations in Perth and Kinross. Well done indeed to you and the team.”

A retired Brigadier, Sir Melville also knows a thing or two about running successful events, as for 10 years he was chief executive of the Royal Edinburgh Military Tattoo.

Others attending included: Stephen Leckie, the Perth and Kinross Lord Lieutenant; Xander McDade on his first major outing as the new Provost; emergency services chiefs in uniform all sporting their new Platinum Jubilee medals; and other civic leaders.

The final word goes to Andy, who said:

“This was a fantastic evening in honour of Her Majesty, the Head of the Armed Forces, and SSAFA’s Patron, and I must extend my deepest thanks to everyone who attended, and all the performers, for the time and money they donated all of which will go to helping SSFA Perth & Kinross carry on its work for our veterans, our serving personnel, and their families as it has for 137 years.”