An Ex-Para plans to ride from Exeter to Lands’ End on new adapted bike to raise money for SSAFA. 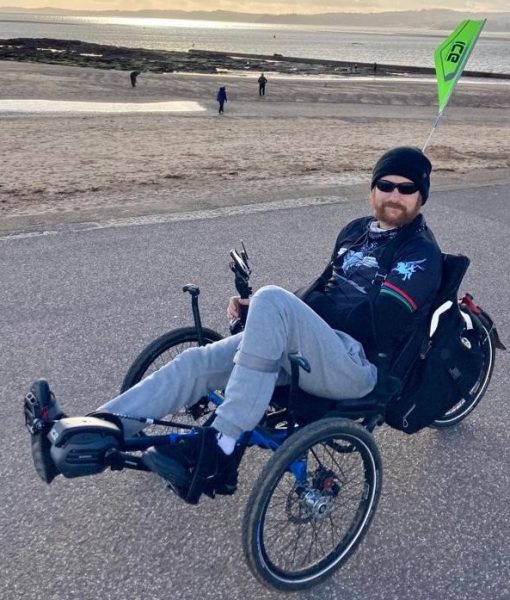 Exeter local Shannon Chart, 38 begins his challenge on St Georges Day, 23 April, starting at Exeter, alongside a group which consists of navy personnel, predominately submariners and includes some who have previously served in the Royal Marines and Paras prior to reenlisting.

Shannon joined the army at 16 years-old and served in the Parachute Regiment for 11 years seeing active service in Northern Ireland, Iraq, and Afghanistan. However, these environments left their mark on Shannon who now suffers with complex PTSD.

Having left the Army at 27 Shannon worked for maritime security overseas, but on returning to the Uk found civilian life to have its own hurdles, experiencing relationship breakdowns, and homelessness.

It was during one of these low points in 2017 that saw Shannon going to bed whilst suffering from a severe stroke. After 3-weeks in hospital he discovered that the stroke had left him paralysed down his left side, with limited mobility.

As a person who used exercise to control his PTSD this was a huge blow, but with the help of SSAFA Devon, Support Our Paras, and several other military charities, who generously assisted in the purchase of Shannon’s trike, Shannon is getting back on track, he has taken delivery of his own recumbent trike that has been specially adapted for him by Inspired Cycle Engineering of Falmouth.

“It has given me the ability to manage my mental health with fitness again. This has been life-changing for me while aiding my stroke recovery. I’m not going to let the fact that I must propel and steer myself predominately with my right side hold me back. I am aware this will be a difficult challenge for me given the terrain and distance, especially since we aim to complete the challenge in just three days.”

“ICE Trikes are delighted that Shannon Chart has organised his First Big Adventure and Fund-raising trip from Exeter to Land’s End to raise funds for SSAFA, the Armed Forces charity.
When I last spoke to Shannon on the phone, he was very excited about receiving his ICE Trike and being able to raise vital funds for SSAFA as well as awareness about how he plans to overcome his own personal challenges to enable more Veterans and their families to benefit from the fabulous work SSAFA undertake in supporting Veterans like Shannon and myself”.

To donate to Shannon’s fundraising challenge, go to gofundme.com/f/ex-para-shannon-rides-for-ssafa-devon