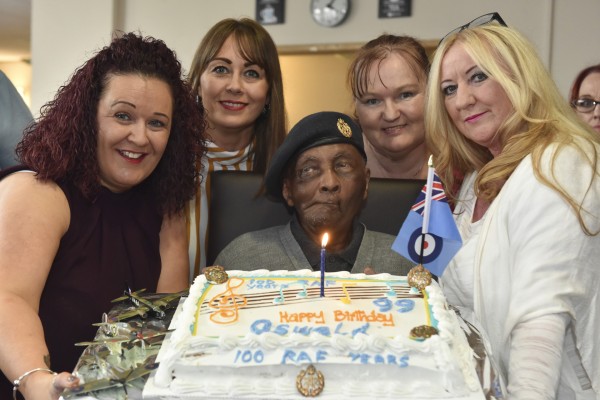 The oldest resident at Salford’s Broughton House care home for ex-servicemen and women has celebrated his 99th birthday.

Friends, present and former staff and supporters of Broughton House attended a party for Oswald Dixon, whose cake was decorated with an RAF flag, badges and model aeroplanes.

Oswald came from Jamaica to join the RAF as an engineer during the Second World War. He remained in the service until he retired, teaching new recruits.

He was living alone in Salford until 2015 when he moved into Broughton House. Due to illness and deteriorating sight, he was no longer able to live on his own. He has no known relatives in this country.

The party featured a DJ playing Oswald’s favourite songs from the 1940s, as well as dancing and a buffet.

Oswald was born in April 1919, a year after the RAF was formed. His party also included a display of memorabilia to celebrate this month’s RAF centenary.

Owen Hammond, a Broughton House volunteer and its museum curator, spoke about the history of the RAF.

Ty Platten, chief executive of Broughton House, said: “Oswald has won the hearts of everyone who knows him. He’s a very humble and sweet man with an infectious laugh and brilliant sense of humour.

“He has not let losing his sight or his age affect his positive outlook on life.

“It was a pleasure to celebrate the birthday of a wonderful man who gave many years of his life in service to this country and continues to inspire people through his humility and kindness.”

Air Vice-Marshal Dr Jon Lamonte, a trustee of Broughton House and the chief executive of Transport for Greater Manchester, paid tribute to Oswald, saying: “Having served myself for nearly a third of the time of the RAF’s existence, I am delighted that we have been able to celebrate its centenary with Oswald’s 99th birthday. There can be no better way to link our residents who served with such distinction to the past, present and future of our armed forces.”

The RAF Benevolent Fund, a charity which supports current and former members of the service and their families and helps to pay for RAF veterans staying at Broughton House, was among the organisations which sent a card and gift to Oswald.

Alison Wyman, its head of welfare programmes and development, said: “Oswald’s selfless service to the Royal Air Force embodies the very spirit of all we are celebrating as the RAF turns 100 this year, so we were delighted to be able to help him mark his own birthday.

“The RAF Benevolent Fund exists to repay the debt we owe as a nation to all the brave men and women like Oswald who have made sacrifices to serve their country throughout the last century. We are proud to be able to help veterans enjoy their retirement with comfort and dignity.”

For more information on the RAF Benevolent Fund, visit www.rafbf.org