The Grimsby and Cleethorpes Division of SSAFA, the Armed Forces charity received £1,000 from Phillips 66 Humber Refinery after one of its staff – Ken Weller, late of the Royal Anglian Regiment – made the nomination. 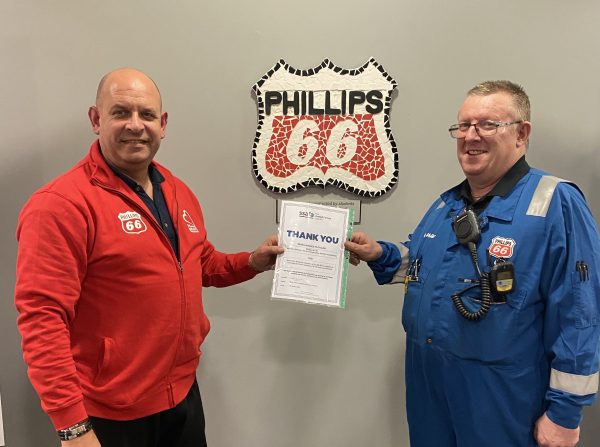 “From a simple food parcel to supplying white goods and furniture, or emotional support when things get tough, SSAFA works tirelessly for the Armed Forces and veterans all over the UK.

“In our area and elsewhere, SSAFA’s helped many people get back on their feet after life events that have caused worry to those who signed that blank cheque to Queen and Country.”

“Phillips 66 holds the coveted Silver Award for the help given to the Forces as they leave and go into the big world outside of the military family through the Armed Forces Covenant, and I feel proud to be an employee of this company.

“It just felt it right that charities such as SSAFA should be supported and therefore I nominated it for a donation this year.”

“In 2020, our Division received a £1,000 donation from Phillips 66 Humber Refinery and unexpected, It was very much appreciated, so, you can imagine how delighted we were in December 2021 to receive an email from Shaun Lowden, Rail Loading Terminal Leader and volunteer on the Humber Heart Charity Team telling us that Ken had nominated us for another £1,000 donation from Phillips 66 Humber Refinery, which had been successful.

“Over the past couple of years and because of Covid-19, all fundraising was put on hold, so it hasn’t been easy for SSAFA. So, as you can imagine, to receive another £1,000 donation is very much appreciated and on behalf of our Division, I am extremely grateful to Ken for nominating us and Phillips 66 Humber Refinery for their donation which will be spent – 100% of it – helping to support veterans and their families in North East Lincolnshire.”