Falklands veterans and their families gathered in Edinburgh on Saturday 18 June to pay tribute on the 40th anniversary of the end of the conflict. They were joined by the Rt Hon Lord Provost of the City of Edinburgh Robert Aldridge and Cabinet Secretary for Justice and Veterans Keith Brown MSP for the parade and remembrance service. 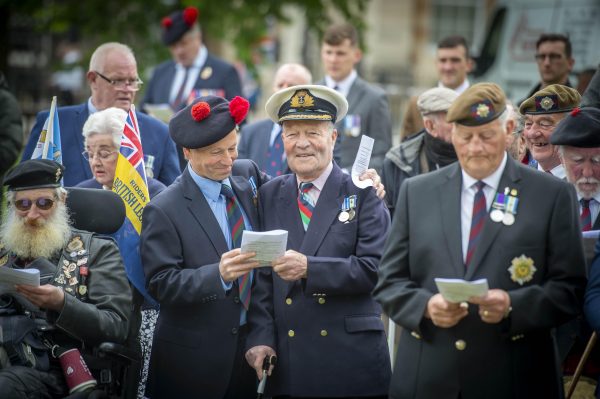 Hundreds lined the streets as the Band of Her Majesty’s Royal Marines and the Scots Guards Association Pipes and Drums marched along George Street before the service in St Andrew Square. Many Falklands veterans were among those taking part, including former Scots Guards drummer, Graham Hopewell, from Ayrshire.

At 11am, the bands were joined by more than 120 pipers across Scotland and as far away as Peru, New Zealand and the Falklands, to play “The Crags of Tumbledown Mountain” in unison. This tune was composed by Scottish Pipe Major James Riddell in the midst of the decisive battle on 13th June 1982, which led to the Argentine surrender and the end of the war the following day.

The commemorations were organised by Legion Scotland and Poppyscotland, in partnership with the Armed Forces and the Scottish Government.

The Rev Dr Karen Campbell, National Chaplain of the Royal British Legion Scotland, and The Rev Angus Smith, former Padre to the 2nd Battalion Scots Guards who served in the Falklands, jointly led the service. They remembered the 255 British servicemen who fell in the Falklands, as well as 649 Argentinian military personnel, three civilians, and thousands more who were wounded.

The conflict began on 2 April 1982, when Argentina invaded the British territory in the South Atlantic, and ended on 14 June, as British troops approached the capital, Stanley. It was the first military action since the Second World War which involved all elements of the British Armed Forces.

Following the service, wreaths were laid by the Lord Provost, Mr Brown MSP, Rear Admiral Mark Beverstock, a Falklands veteran and President of Legion Scotland and Poppyscotland, the Heads of all three Armed Services in Scotland, and the War Widows Association.

Participants then enjoyed musical entertainment from the two military bands, Legion Scotland Sweetheart Amy Hawthorn, Stuart McLean, Juniper 3 and Ellyn Oliver. The public were also able to enjoy exhibits from Legion Scotland, Poppyscotland, and many other organisations and associations.

“It was heartening to see so many people come together today to pay tribute to all those who served in the Falklands. For veterans and their families, today was a very poignant day, as we remembered those who laid down their lives 40 years ago. Even now, many of those who served are still living with the physical and mental scars of the conflict.

“This was also an opportunity to recognise the extraordinary resilience of our Armed Forces community and the vital role they continue to play today. We’re delighted that people of all ages have engaged with our learning programme over recent months, taking the chance to find out more about the Falklands and other conflicts, and their impact on our recent history. It was particularly moving to hear the iconic pipe tune “The Crags of Tumbledown Mountain” being played at 11am, both here at St Andrews Square and by our global pipe band in all corners of the world.

“We would like to thank the City of Edinburgh Council and everyone else who has made today’s events possible, as well as the public for their support.”

“I am delighted that we have been able to partner with Legion Scotland and Poppyscotland to deliver a commemoration which will provide the people of Scotland with an opportunity to recognise the sacrifices made 40 years ago in the Falklands War.”

Sharing his memories of the long journey to the Falklands onboard the QE2, Rev Smith said: “We suddenly remembered what war entailed.  The question that was at the back of our mind was “would we or would we not return”.  But I had to go beyond that.  I had about 500 lads who were in the same position. These were the ones who were fighting, so it was up to me to help these people as much as possible.”

Reflecting on the 40th anniversary commemorations today, Rev Smith continued: “It has been one of the most wonderful experiences I’ve had in years.  The thought that has gone into this, it’s beautiful really.  The first person I met today was the wife of a great friend of mine, who was amongst the first men killed in the war.  We just looked at one another today, and we couldn’t speak.”