Despite the cancellation of the Remembrance Day services in London in November, Poppy Cab supporters once again proved just how supportive they are by raising over £6000 for charities. 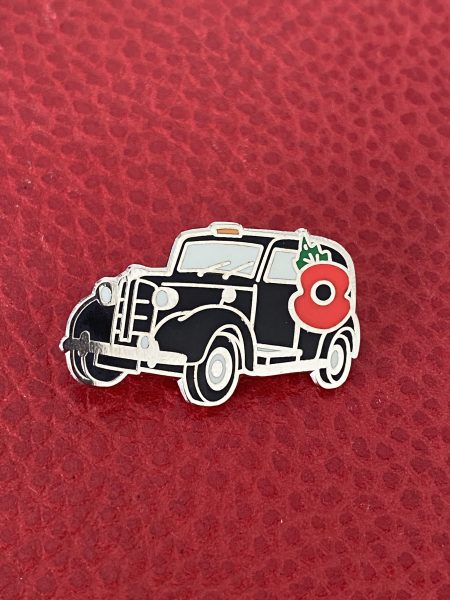 The money raised through the sale of the popular Poppy Cab pin badge raised £6,270, which was shared between The Royal British Legion, the Taxi Charity for Military Veterans, and the Scottish War Blinded.

“In addition to the hundreds of badges that raised donations, we provided over 150 badges free of charge, or at a nominal cost, to veterans and those who have shown great support to Poppy Cabs.

“I would like to say a big THANK YOU to all who helped promote the badges. It is always difficult to name any person or organisation, but we were represented by several taxi trade organisations, garages, green huts, refreshment locations as well as many individuals, across London and in Scotland via Edinburgh Poppy Cabs.”

“The Taxi Charity is delighted that despite all the challenges people supported the Poppy Cabs initiative and wore the Poppy Cab pin badge with pride during November last year. As a charity that is wholly reliant on donations, we are thrilled to receive £2,300 from Poppy Cabs and we hope that next year we will once again see hundreds of cabs lining Westminster Bridge to take veterans to the Remembrance Day services without charge.”

To find out more about Poppy Cabs email mike@mikehughes.org.uk

Started in 2009, The Poppy Cabs service is an integral part of Remembrance Sunday, involving hundreds of proud London taxi drivers coming together to support our country’s veterans. For the last ten years London’s Licensed Cabbies have delivered over 10,000 free taxi journeys for veterans on Remembrance Sunday as part of the “Poppy Cabs” initiative

In recent years over 5000 veterans have used the free service and this initiative perfectly demonstrates the amazing spirit and generosity of kind-hearted London cabbies. Funded entirely by the drivers themselves, this is seen, alongside events organised by The Taxi Charity and the London Taxi Drivers Charity for Children, as one of the highlights of the year when taxi drivers make a special effort to pay back part of the debt owed to our military veterans.

There is no single organisation that organises the Poppy Cab service. The drivers provide their taxis and their time free of charge to the veterans. The independent coordinator prior to the event is Mike Hughes who matches drivers with special need users. On the actual day there are many drivers, knowledge students and family members who marshal the event, helping veterans into the taxis at each pick up point to ensure a smooth journey for those attending the Remembrance Sunday service and parade.