International Women’s Day is just over a week away (Friday, 8th March) and Scotland’s leading military charity is embracing the annual event in order to celebrate the contribution of women in the Armed Forces. Poppyscotland will be paying tribute to female veterans and volunteers, and, across Fife and the Lothians, collectors will be helping to raise vital funds for the charity over the course of next week (March 4th-10th). 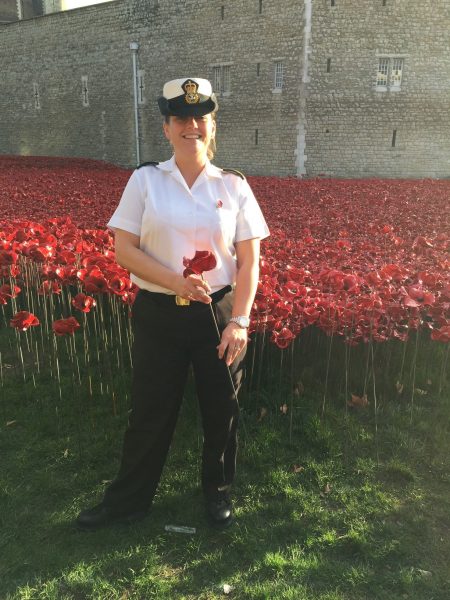 Of course, when it comes to the Armed Forces in Scotland, one woman stands tall for her contribution to our country’s Poppy Appeal. Lady Haig, wife of Field Marshal Haig, established a Poppy Factory in Edinburgh in 1926 to produce poppies exclusively for Scotland.

The poppy was not just a symbol of remembrance, but a way to raise money to support the welfare of ex-Servicemen left destitute in the aftermath of the First World War. Lady Haig’s Poppy Factory is still in action today employing more than 40 disabled veterans who produce around five million poppies by hand for the annual Poppy Appeal.

Jodie Whitham, who is Poppyscotland’s Regional Fundraiser for the East of Scotland and the organiser of next week’s collections, has a special family connection to the Armed Forces of her own. She said: “My gran, Joyce Lee, was in the Women’s Land Army (WLA) in 1943. At the time, she was 19 and her role was to look after Italian war criminals at the Eden Camp, in Malton [North Yorkshire]. She loved her job and the friends that she made, and she often talked about how she felt she was doing her bit for her country. Our family are all exceptionally proud of her.”

Jodie, 26, added: “Italy surrendered in 1943 and their men volunteered to work on farms. My gran always said that the WLA were put in charge so that the prisoners wouldn’t run away if women were looking after them!

“There was an American air base nearby. She was engaged to an American, who was a rear gunner on the bomber aircraft, but he was killed in action and Gran said that the life expectancy of a rear gunner at the height of the war was about three weeks. As we get ready for International Women’s Day, her story feels even more poignant and I’ll be holding my poppy tin with pride next week. It would be wonderful if others could join us.”

One volunteer who will be rallying to the Poppyscotland cause is Laura O’Neill, from Rosyth, who served for 26 years in the Royal Navy before being medically retired last year. Laura, 43, has been a supporter of Poppyscotland since her time in the Sea Cadets at the age of 11 when she would distribute poppies at the Garden of Remembrance in Hamilton, near her hometown of East Kilbride.

Laura looks back on her military career fondly: “I was deployed with 800 Naval Air Squadron on board HMS Invincible. This was still a very new concept at the time as females had only been serving at sea on-board ships for three years. There was very few of us in the grand scheme of things and we had no senior female ratings at all to provide guidance or mentoring, but was a challenged we relished.

“HMS invincible had been deployed to the Mediterranean as part of Operation Grapple. Our jets were tasked with enforcing the no fly zones as part of Operation Deny Flight. We also provided close air support for UN troops in Bosnia. During this time I was part of the ‘Bomb Team’ as my short height meant I was the ideal size to lie underneath the aircraft to fit and remove the ADEN cannons.

“We spent weeks and weeks loading the aircraft with guns and missiles only to remove them when they returned from their sorties. Then the day finally came when we loaded the aircraft and they started to come back having expended their payload. We were working a constant eight hours on and eight hours off routine, seven days a week. Sometimes we would get up and not know whether it was 5pm or 5am. It was gruelling work, but I loved every minute of it.”

However, being female in a male-dominated environment created issues, as she explains: “I did have problems with male counterparts who didn’t believe I should be where I was and doing the job I did. I used to tell myself repeatedly that they acted negatively as a result of them feeling threatened by my ability and their own insecurities.

“It did drag me down at times, obviously, and there were tough times throughout my career. It was at these times when I had to remember the love of what I was doing, and my position of trust to the younger girls meant I had to pick myself up and crack on; to lead by example. And, as my dad would often tell me: ‘Don’t let the boys drag you down!’ We now have girls joining the Royal Marines and serving on front-line Army infantry units. And why not! If they are physically and mentally able, they should go for it!”

Laura adds: “Having spent all of my adult life in the military, I have huge respect for the work of Poppyscotland. Their ability to help those in need and improve the life of any veteran and their family is invaluable, and I would urge people to come along next week to volunteer for a few hours for such a wonderful cause.”

Poppyscotland is still very much on the lookout for volunteers – female and male – to help out from March 4th to the 10th in a number of locations in Fife and the Lothians, including Edinburgh Waverley station, Dundee train station, Ocean Terminal, Fort Kinnaird and various other shops and shopping outlets. For more information, please contact Jodie Whitham, Poppyscotland Regional Fundraiser (East), on 0131 550 1579, or 07458 064 770, or at J.Whitham@poppyscotland.org.uk.