A 14-year-old boy and aviation enthusiast who has illustrated a book on military planes in aid of SSAFA, the Armed Forces charity, has received Prime Minister Boris Johnson’s daily Points of Light award. 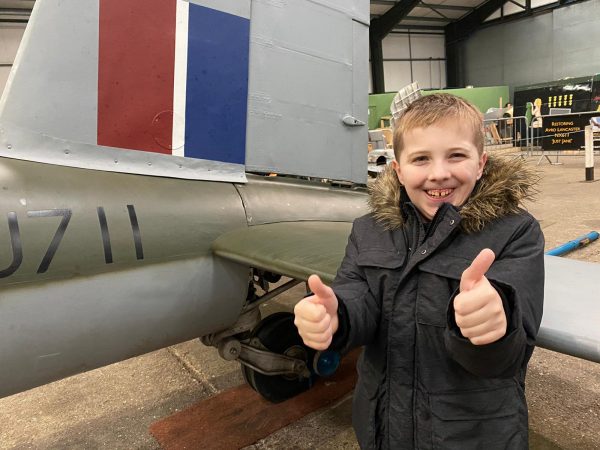 Jack Berry, from Sunderland, who has autism and is also selectively mute, began using art as an emotional outlet during the Coronavirus pandemic, channelling his interest in planes into drawing Lancaster bombers, Spitfires and Tornados. Jack’s illustrations are now featured in a book, ‘Flying High in the Sunlit Silence’, which are accompanied by details explaining the history of each plane and helicopter, written by pilots and military experts.

While Jack’s family do not have a military background, they chose for part of the proceeds from the book to go towards SSAFA’s Forces Additional Needs and Disability Forum (FANDF), a Tri-Service group for current Serving families or individuals who have a child or adult dependent with an additional need and/or disability, ensuring Forces families with additional needs and disabilities receive the support they need.

“Every day I write to thank somebody in our country for doing something special. Today that person is you!

“With your beautifully illustrated book, you have captured the majesty of our nation’s aviation history. From the restored NHS Spitfire which lit up our skies with the names of NHS heroes, to the splendour of the Red Arrows, your pictures tell uplifting stories all while raising important funds for SSAFA.”

“This is marvellous news for Jack and he is over the moon. For him, he just wanted to help people and do his part during the pandemic. Jack loves drawing and his drawings have pulled communities together on the whole. The book is a community project, we have had a number of letters from war veterans and as his mum I think it’s amazing that war veterans want to make friends with a child with autism spectrum disorder and selective mutism.”

“Jack is the 1608th person to receive the Prime Minister’s UK daily Points of Light award, which was first launched in April 2014 to recognise outstanding individuals making a difference where they live. Each day, someone, somewhere in the country is selected to receive the award to celebrate their remarkable achievements, including hundreds of volunteers who have been recognised for how they have served their communities through the coronavirus pandemic.  Jack has inspired everybody with whom he has come in contact; I and all in SSAFA, the Armed Forces charity salute him! ”

Jack’s book is out from January 25. If you would like to support SSAFA’s FANDF and other military charities, you can purchase it from Amazon for just under £10: Flying High In the Sunlight Silence

Points of Light are outstanding individual volunteers – people who are making a change in their community. Every weekday the Prime Minister recognises an inspirational volunteer with the Daily Point of Light award. If you think you have a Point of Light working with your charity and would like to know more about the award, then please get in touch with the Office for Veterans’ Affairs at veterans@cabinetoffice.gov.uk