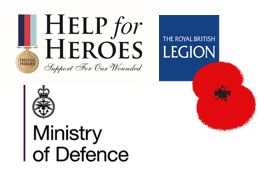 The 90-strong team of wounded, injured and sick (WIS) serving military personnel and veterans came together for the first time since selection at the Tower of London. Prince Harry met the team ahead of the forthcoming Invictus Games in September, and posed for the first official team photograph.

More hopefuls than ever before, 306 WIS military personnel and veterans, trialed 11 sports for one of the 90 places available on the UK team. The rigorous selection process was based on the benefit the Invictus Games will give an individual as part of their recovery, combined with performance and commitment to training.

The 2017 UK Team Captain was also named this morning as former Army Major Bernie Broad, who takes over the mantel from 2016 Captain, David Wiseman. Bernie lost both his legs below the knee due to injuries sustained in an explosion in Helmand Province in 2009. He underwent four years of extensive surgery and rehabilitation followed by two years of assistance from the Personnel Recovery Unit at Chetwynd Barracks in Chilwell.

He said: “Since being medically retired from the Armed Forces in 2014, I feel that I have taken my foot off the gas and become quite complacent. I have always been a keen and competitive sportsman, so I kick started my fitness regime and now regularly swim, cycle and walk. I am looking forward to taking part in the Invictus Games as I see this involvement as a way to re-focus me physically and mentally and to re-engage in a full, active, competitive and fulfilling life.”

On being chosen as UK Team Captain, he added: “The Invictus Games are empowering and inspire all of us as competitors to be the best version of ourselves. It allows us to be judged on what we can achieve, rather than what we can’t. To simply be selected for the UK Team was an amazing achievement. To then be further selected as the UK Team Captain filled me with such immense pride and it is a huge privilege to be given this honour. I definitely stood taller and my chest expanded quite a bit!”

The team will continue to train in various locations across the country as part of Help for Heroes’ extensive Sports Recovery programme and role to train and develop the team.

Jayne Kavanagh, of Help for Heroes and Chef de Mission for the UK Team, said: “With more hopefuls than ever before applying to be a part of the Invictus Games in Toronto, and with more than 60% of the 2017 UK Team being brand new to the Games, it is evident that the legacy of 2014 and 2016 is strong. In the UK team, we have 90 individuals who have displayed high levels of passion, teamwork and commitment to using sport as a tool of recovery both during and beyond the Invictus Games. We are very proud to be working alongside them and wish them the best of luck as they embark on their Invictus Games journeys.”

The Royal British Legion will be supporting the friends and family, including carers, of the UK team as part of its work to recognise the vital and valuable contribution that they make to the recovery of WIS Service personnel and veterans.

The Legion’s Director General, Charles Byrne said: “The Legion is proud to be supporting the friends and family of the UK team athletes at the Invictus Games 2017. We know how important the support of friends and family is to the team, both in their performance and recovery, so their involvement in the games is key. The Legion is co-ordinating travel, accommodation and tickets for family and friends to attend the games in Toronto, to ensure that every athlete can enjoy the support of their loved ones. We will also be providing support to friends and family in the UK in preparation for the games, as well as out in Toronto.”

“The passion and determination shown on the field is truly inspiring and we’re delighted that Jaguar Land Rover employee Pa Njie will be representing us in Toronto this September. We wish him and all of the 2017 competitors the best on this exciting journey.”

The Endeavour Fund, a programme led by The Royal Foundation of The Duke and Duchess of Cambridge and Prince Harry which supports WIS Service personnel and veterans using sport and adventurous challenges as part of their recovery and rehabilitation, is once again supporting the UK team. It has provided £50,000 funding to support the 2017 UK team.

Harry Holt, Chairman of the Endeavour Fund adds: “At the Endeavour Fund we know just how much getting involved in sport can help someone with their recovery and rehabilitation. We are continuing to work hard to ensure that wounded, injured and sick Servicemen and women who are hardest to reach can benefit from being involved with an endeavour. So we were thrilled to hear that over 60% of this year’s UK team are new to the Invictus Games. They should all be hugely proud of what they have achieved so far and we wish them the best of luck for Invictus Games in Toronto.”

The Invictus Games Toronto 2017 will take place from 23 – 30 September. To find out more, go to www.invictusgames2017.com

ABOUT THE UK DELEGATION

The UK delegation to the Invictus Games 2017 is once again being delivered by a partnership comprising Help for Heroes (H4H), The Ministry of Defence (MOD), and The Royal British Legion (TRBL).

ABOUT THE MINISTRY OF DEFENCE

ABOUT THE ROYAL BRITISH LEGION

The Royal British Legion’s work is encapsulated in its motto: Live On – To the memory of the fallen and the future of the living. The Legion is the nation’s biggest Armed Forces charity providing care and support to all members of the British Armed Forces past and present and their families. It is the national custodian of Remembrance and safeguards the Military Covenant between the nation and its Armed Forces. It is well known for the annual Poppy Appeal, and its emblem the red poppy.  www.britishlegion.org.uk

Since 1948 Land Rover has been manufacturing authentic 4x4s that represent true ‘breadth of capability’ across the model range. Discovery, Discovery Sport, Range Rover Sport, Range Rover and Range Rover Evoque each define the world’s SUV sectors, with 80 per cent of this model range exported to over 170 countries. For more information visit www.landrover.co.uk

The Armed Forces Covenant is a written and publicised voluntary pledge from businesses and charitable organisations who wish to demonstrate their concrete support for the Armed Forces community. Jaguar Land Rover signed the Covenant in July 2014.

Since 2013 Jaguar Land Rover has hired some 200 former servicemen and servicewomen, working closely with the Career Transition Partnership, the Ministry of Defence’s official provider of Armed Forces resettlement. 100 of the veterans have been employed over the past year.

The company has a growing number of initiatives, including a work placement scheme, launched in October 2014 in conjunction with the Ministry of Defence’s Career Transition Partnership (Assist) and Mission Motorsport – The Armed Forces’ Motorsport Charity. The scheme helps wounded, injured and sick veterans find a fulfilling and long-term second career. To date, 17 placements have been run, leading to 13 full-time jobs at Jaguar Land Rover and its suppliers.

ABOUT THE ENDEAVOUR FUND

The Endeavour Fund plays an important role in ensuring that Servicemen and women have the opportunity to rediscover their self-belief and fighting spirit through physical challenges. Engagement in physical challenge promotes recovery by targeting the physical, psychological and social impacts of injury. www.endeavourfund.co.uk or @EndeavourFund