Pipe Major Richard Grisdale, Piper to Her Majesty The Queen, led more than 500 pipers across the world in a stunning tribute to commemorate the 80th anniversary of St Valéry. The largely forgotten Second World War battle led to 10,000 mainly Scottish soldiers from the 51st Highland Division being captured at St Valéry-en-Caux. They had continued the fight on the continent in support of the French after the Dunkirk evacuations had been completed. 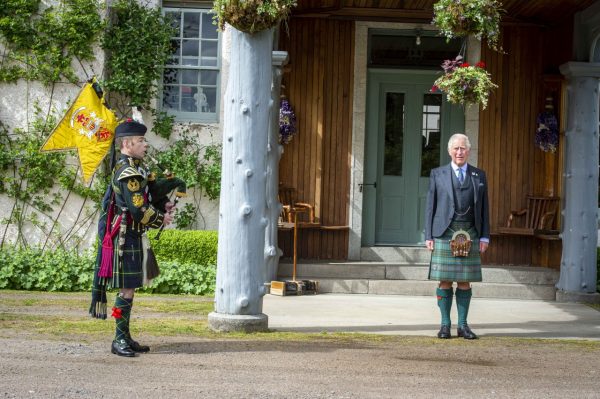 “On 12th June 1940, after a gallant stand, the 51st Highland Division with supporting arms and services, including elements from English regiments, was forced to surrender to the German army at St Valéry-en-Caux on the Normandy coast of France.

“At 10am this morning, on this year’s 80th anniversary, pipers throughout Scotland and further afield were on their doorsteps playing the celebrated march, the Heroes of St Valéry, in honour of the fallen and to remember a battle in which those of the Division displayed the greatest courage and tenacity. We remember all who served and who sacrificed so much.”

The piping performance at Birkhall was echoed all over Scotland and throughout the world, with around 500 pipers taking part in today’s poignant occasion. It is thought the level of participants is a record for the greatest number of pipers playing simultaneously. Pipers from as far afield as Peru and Kathmandu performed the Heroes of St Valéry, which was composed by Donald MacLean after his capture at St Valéry in June 1940. He spent the next four years as a prisoner of war.

Today’s events were developed by three leading Scottish Armed Forces charities: Poppyscotland; Legion Scotland; and RCET: Scotland’s Armed Forces Children’s Charity. All of the broadcasts can be viewed live from the charities’ Facebook pages, and also from Poppyscotland’s YouTube channel.

The public is being asked to support the St Valéry tribute through a fundraising campaign which will support the work of the three charities. To donate £5, please text PIPER to 70007. Standard network rates may apply but the charities will receive the full donation amount.