You are here: Home / News / News / RACPD running the distance for RBL

RACPD running the distance for RBL

On Wednesday 8 September RACPD collectively ran, walked and cycled a distance of 598km or 372 miles to raise vital funds for the Royal British Legion during the charity’s 100th year anniversary for their RBL100 Appeal. 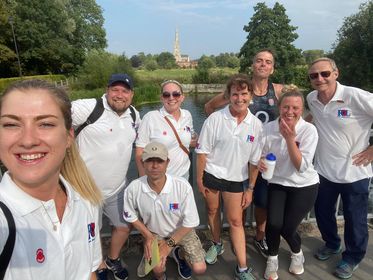 Events included having a stand in Salisbury City Centre with RBL merchandise for sale and the RACPD main office team circumnavigating a 5km route, taking in the beautiful Harnham Water Meadows in groups with 20 minute time intervals. A total of 17 laps were completed, a mixture of running, walking and cycling with 26 participants and 3 or 4 individuals per lap.

The Northern team: Jim Harker, Susan Hudson, Mark Keane and Si Irwin walked 77kms along the picturesque Hadrian’s Wall in glorious sunshine with Mark Slaiter from Plymouth cycling 160 kms in torrential rain and winds! Alison Hinds walked to the summit of Ben Nevis, a staggering 27kms with the most amazing views.

A fabulous team effort raising more than £1628.00 for this fabulous charity, who work tirelessly to ensure Armed Forces veterans get the support they deserve.