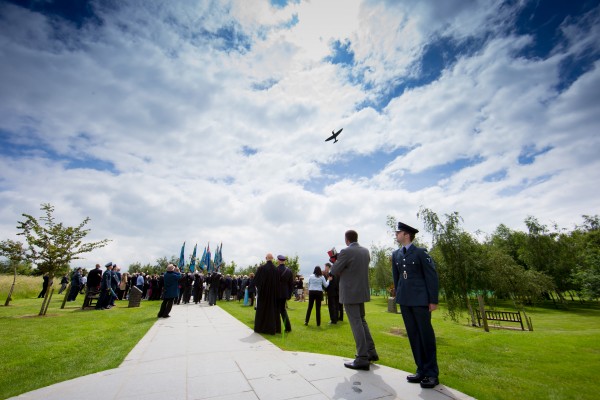 Beloved members of the RAF who have given their lives for their country were remembered by relatives and friends on Friday 16 June 2017 when The Royal Air Forces Association held its annual remembrance service.

The ceremony at the National Memorial Arboretum in Staffordshire gave around 300 family members, friends and colleagues the opportunity to commemorate the lives of relatives and ancestors who lost their lives, some of whom have no grave or last resting place.

After the service, the congregation walked behind the Association’s standards to the RAF Association’s Garden of Remembrance for a wreath and cross-laying ceremony and three flypasts by a Spitfire.

The remembrance garden was designed as part of the charity’s pledge to remember with pride and gratitude the lives of all members of the Royal Air Force who devoted their lives to their country. During the service, the names of everyone commemorated in the garden were acknowledged.

Families, friends or colleagues wishing to celebrate the life of a person or organisation associated with the RAF may place a personalised remembrance cross or stone in the RAF Association Remembrance Garden. Donations given for these crosses and stones are used by the Association to help support serving and former RAF personnel and their families in times of need.

The Association encourages anyone making a visit to the Arboretum at any time of year to visit the RAF Association Remembrance Garden to pay their respects. Further information on the garden or remembrance stones and crosses is available from vinny.manak@rafa.org.uk or by calling 0116 268 8791.