You are here: Home / News / News / RAF Association opens new community hub in the heart of Preston – and presents WWII veteran with his medals during the opening ceremony 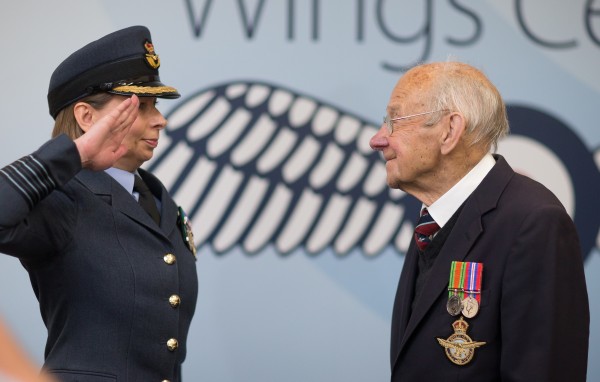 A WWII veteran was finally presented with medals he earned from the campaign, 72 years after leaving the RAF. The medal ceremony for Albert Pemberton-Sheen formed part of the formal launch of the RAF Association’s new Wings Centre, on Fishergate, Preston, on Tuesday 6 June 2017. As well as Albert, guests of honour included the mayor of Preston and the secretary general of the Royal Air Forces Association.

After wondering about Albert’s career in the RAF, training pilots, Albert’s step-daughter Elaine researched the medals he was entitled to. She visited the Wings Centre to see if they could help her to apply for them. Centre manager Ian Barber was glad to support her. Elaine says: “Thank you so much for doing this for us. I didn’t know where to start with Bert’s medals. I went into the Wings Centre on my lunch break for some help to fill in forms and two weeks later he got his medals. It’s a great place for Bert to socialise with other veterans and listen to each other’s stories. He doesn’t meet people since he lost my mum.”

Speaking about the opening, Ian Barber said: “The Wings Centre is part of the RAF Association’s welfare support for current and ex-serving forces personnel. It’s our first high street support centre in the country. It offers a warm and welcoming environment to get involved with the Association. It’s for anyone who needs a safe meeting place for groups, an opportunity to build friendships or a location for our beneficiaries to get some much-needed welfare support. The Preston Wings Centre is there to support anyone from the RAF family in the Preston area. We also welcome anyone involved with other branches of the Armed Forces. And we sell our famous RAF Association pilot ducks –anyone can drop in to buy a set to support our work!”

“I am hoping the Wings Centre will act as a bridge between the Armed Forces community and the people of Preston,” Mr Barber added. “We’ve got lots planned in the upcoming months, and the Wings Centre should be a hive of activity, right at the heart of Preston.”

The RAF Association depends on the generosity of the general public for the majority of its funding for its welfare work.

Find out more at www.rafa.org.uk