The RAF Benevolent Fund celebrated the generous work of its supporters at its annual awards ceremony on Thursday 21 November. The ceremony, held at Plaisterers’ Hall in London, was attended by hundreds of RAF personnel, veterans, and supporters of the Fund. 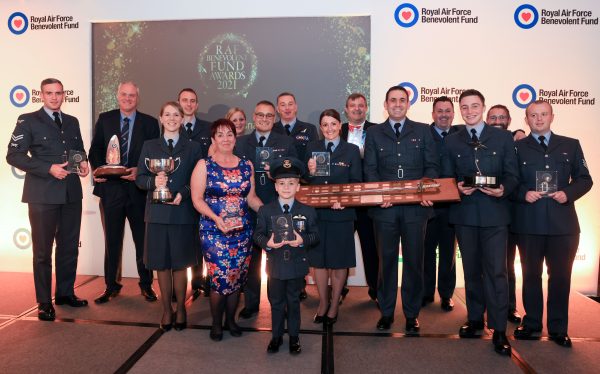 Now in its ninth year, the RAF Benevolent Fund Awards celebrate the outstanding contributions of its fundraisers, volunteers, and partners. The title of RAF Station of the Year was won by RAF College Cranwell, which organised the RAF College Cranwell Virtual Challenge to celebrate its 100th anniversary while raising more than £10,000 for the Fund. Meanwhile, RAF Shawbury took home the RAF Stations Challenge Cup for raising the most money strictly through sporting events on a per-head basis.

“After making the difficult but necessary decision to hold our annual awards ceremony virtually last year, it’s been an absolute pleasure to see so many friendly faces once again in person this year as we celebrate the efforts of our supporters and fundraisers.

“Last year was a challenging time for the whole of the RAF Family, and the awards are a great opportunity to recognise all of the fantastic work that allowed us to continue supporting RAF veterans, serving personnel and their families throughout the pandemic and beyond.

“I’d like to pass on my congratulations to all of this year’s winners. The enthusiasm, creativity, and generosity we saw over the course of 2020 was truly inspiring, so from all of us here at the Fund – thank you.”

Winning the Above & Beyond title was seven-year-old fundraiser Jacob Newson, who has raised more than £43,000 for the Fund to date. In 2019, Jacob and his dad Andy climbed Pen-y-Ghent in Yorkshire; in 2020 they walked 30 miles in two days from RAF Manston in Ramsgate to the Battle of Britain Memorial in Folkestone; and in August 2021 the pair climbed Ben Nevis.

Below is the full list of winners of this year’s awards, which were sponsored by Lockheed Martin UK.