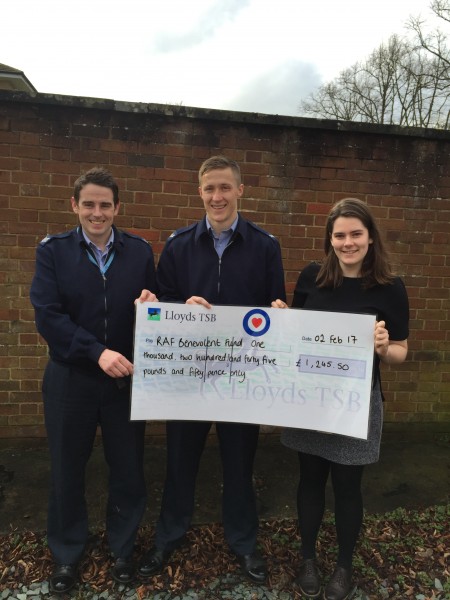 A boxing night at RAF Brize Norton has raised £1200 for the RAF Benevolent Fund.

The event, organised by Corporal John Kearns and Sergeant Anthony Lydon, with the help of the RAF Brize Norton Fire Section, saw bouts between boxers from the RAF, the Royal Navy and local boxing clubs. An auction also took place mid evening for the chance to win boxing gloves and an RAF boxing shirt signed by Tony “Bomber” Bellew the current WBC Cruiserweight Champion.

Corporal Kearns said: “The boxing night was a huge success and the money raised was far more than we had expected. The boxers had trained hard and it showed on the night. I must thank my colleagues in the Fire Section for their support throughout the planning of this event.”

The night was attended by the RAF Boxing Vice President, Wing Commander Morley, who said, “It was great to have a wonderful and exciting night which was enjoyed by a packed audience. From my point of view it’s the kind of night we like to support if not only for the good of the Station but also for boosting the athletes. The RAF Boxing Association are grateful to Corporal Kearns and Sergeant Lydon for their impressive efforts to bring this night together.”

Charlotte Barmby, Regional Fundraiser South for the Royal Air Force Benevolent Fund’s, said: “We’re hugely grateful to everyone at RAF Brize Norton for organising this wonderful event.  The evening was a fantastic spectacle and the money raised will help the RAF Benevolent Fund to continue to support the RAF family.”