The event took place at the start of Armed Forces Week to celebrate the launch of the RAF Benevolent Fund’s Join the Search. Change a Life campaign encouraging the public to get thousands of RAF veterans and their families ‘back on the radar’ and, if they need it, accessing support that is rightfully theirs. 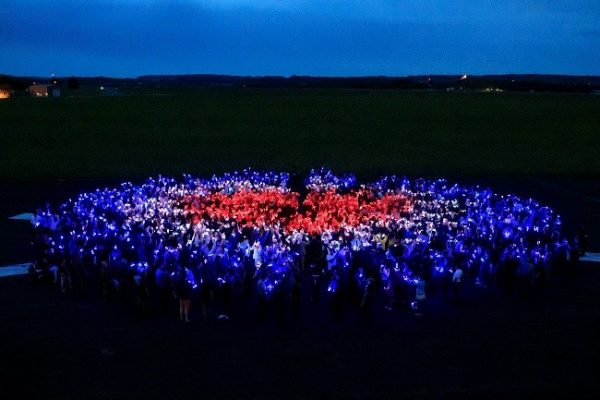 The lightshow was created using Xylobands LED wristbands which lit up the crowd turning it into a pulsing, sweeping radar, before changing colour and transforming into the familiar RAF roundel, and finally the RAF Benevolent Fund logo. Beneficiaries whom the Fund has helped were in the heart of the circle including former Sergeant Bob Greig, 59, who joined the RAF in 1979 and served for six years as a parachute jumping instructor when he was seriously injured and 96-year-old Bomber Command pilot George Dunn DFC, who enjoys trip to the Fund’s care centre on the South Coast.

The event, timed to coincide with the Fund’s centenary, was photographed from above by a drone, and choreographed to the Band of the RAF Regiment playing an uplifting rendition of the Royal Air Force March Past. It included a display by the Queen’s Colour Squadron, who also performed a lightshow.

“In our centenary year, we want to reach the veterans and their dependants who need help now, before it’s too late. Many of these older people took part in National Service, where they were called upon to serve their country.

“The RAF Benevolent Fund wants to get these people back onto the radar, and we aim to almost double the number of people we help – from 53,000 to at least 100,000 over the next three years.

“We’re incredibly grateful for the vast support from everyone who joined us to celebrate the launch of our campaign and create our Human Radar. We hope it will help raise awareness of our services and encourage friends and family of veterans and their dependents to get in touch with us, ultimately, helping older people live with dignity, and ensuring we can serve the RAF Family for decades to come.”

“Seeing the outpour of emotion and support for our veterans around the recent D-Day anniversary was heartening. However, there is a whole other generation of RAF veterans who need our support, those who served post WWII and who made sacrifices to do their National Service. Many are in need of support now and so I’m proud that our serving community can play an important part in launching the search and help get these people on the radar.”

Research carried out by the Fund estimates that the RAF Family is made up of 1.4 million people who are either serving or who have served in the RAF and their spouses, partners or dependent children. Three quarters of them are aged over 65 and, in total, research shows that at least 300,000 need support.

The RAF Benevolent Fund offers a wide range of support for serving and former serving personnel and their families, from financial grants for one-off and day-to-day costs, respite breaks and emotional support. Last year it spent £21M on welfare support for the RAF Family, including:

Footage, including still and film, from the Radar launch, and case studies, can be downloaded here: http://bit.ly/RAFBF100-Press

The Royal Air Force Benevolent Fund is the RAF’s leading welfare charity. We exist to support current and former members of the RAF, their partners and dependants, whenever they need us. In 2018 we spent £21M supporting more than 53,000 members of the RAF Family. For more information visit: www.rafbf.org and Twitter: https://twitter.com/RAFBF

All figures, unless otherwise stated, are from YouGov Plc. Total sample size was 2075 adults of which, 161 were from the East Midlands. Fieldwork was undertaken between 12 to 15 April 2019. The survey was carried out online. The figures have been weighted and are representative of all UK adults (aged 18+).