A team of medics, exercise rehabilitation and physios based at RAF Odiham, in Hampshire, have completed the gruelling Fan Dance – part of the SAS selection course – to raise money for the RAF Benevolent Fund, the RAF’s leading welfare charity. 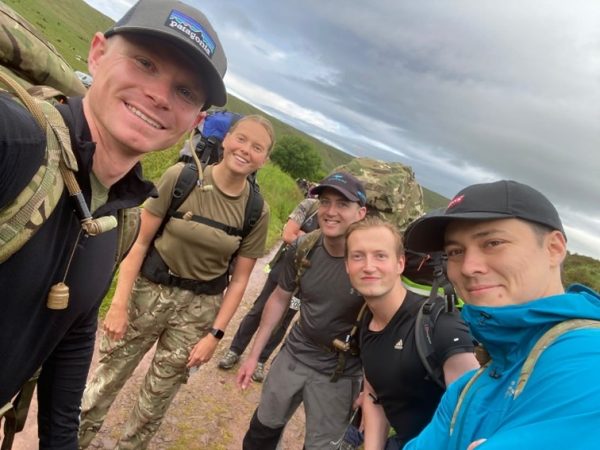 The Fan Dance is a challenging 24km SAS Selection test march staged over Pen y Fan, the highest mountain in the Brecon Beacons.

The infamous march is the world’s oldest Special Forces test and is used as the first major indicator of whether a candidate has the physical and mental aptitude to complete the legendary Selection course.

SAC Dulcie Atkinson was part of the team that completed the course earlier this month and has so far raised close to £400 for the RAF Benevolent Fund.

“We decided to raise money for the RAF Benevolent Fund because, as medical personnel, we see a variety of people from all walks of life benefiting from the resources the Fund delivers. We realise how lucky we are to be supported by such a fantastic organisation and we would like to give back to them.”

Dulcie, 21, who is originally from Northern Ireland, added:

“We all feel great for finishing. It was super tough, but we celebrated by getting a huge takeaway Chinese. We were pleasantly surprised by how much we managed to raise and are incredibly proud.”

The rest of the team included SAC Dawid Leszczynski, Cpl Scott Perry, Steven Cain and Stephen Jennings. SAC Lisa Lamberton organised the event but was unable to take part, though she was instrumental in raising money for the challenge.

You can support the team’s fundraising efforts here: https://www.gofundme.com/f/raf-benevolent-fund-pen-y-fan-fan-dance