A pair of snooker lovers are taking a well-earned break after playing the longest game of snooker ever recorded, to raise money for a national military charity. Sergeant Chris Bullen (left) and Corporal Joel Pickersgill (right) broke the world record for the longest snooker match, at the RAF Association’s Gateway Club. Sergeant Chris Bullen and Corporal Joel Pickersgill played snooker continuously for 87 hours and 33 minutes at the Royal Air Forces Association’s Gateway Club in Newark, Nottinghamshire.

The two friends, who met at RAF Odiham eight years ago and bonded over their love for the game, started playing on Wednesday 5 June at 10am and did not stop until 1.33am on Sunday 9 June.

Joel emerged victorious, beating his friend by 118 games to 48. No rematch is planned. The previous record for the longest snooker singles marathon was 85 hours, 19 minute and four seconds. 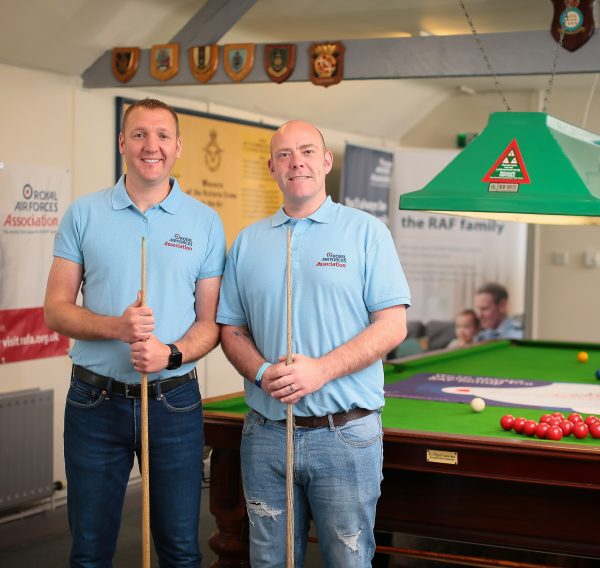 “This was without a doubt the hardest thing I’ve ever done in my life, but it was something I planned to do for years, and it’s a great feeling being a record breaker.

“All the money raised will go to the RAF Association, the charity that supports wellbeing of the RAF family. The Association kindly allowed us to play our marathon upstairs at their Gateway Club, and dozens of volunteers helped adjudicate the match and organise everything.”

Over the course of the marathon session, the pair played 166 consecutive frames, potting more than 7,000 balls. The Guinness World Record rules allowed Chris and Joel a five minute break every hour, and these were accrued to give them precious nap breaks.

“We had originally planned to play for 100 hours, but after nearly four days of non-stop play and after breaking the 85 hour record, we were both exhausted and decided to call it a night.

“I have colleagues and friends who were helped by the RAF Association, so we wanted to give something back to the charity. The local branch and club has been extremely supportive, and we’d like to personally thank everybody who helped with our challenge.”

“Chris and Joel’s superhuman efforts are hugely appreciated. We’re thrilled that our members and associated volunteers could help them to make a little bit of history here using our snooker table.”

At the time of writing, Chris and Joel raised more than £1,200. Donations to their cause can still be made via their JustGiving page: https://www.justgiving.com/fundraising/joel-pickersgill1984?utm_id=22

Whether it’s an injured airman or woman fighting to get back on their feet, a young child missing their parent away on overseas operations, or a World War II veteran needing a shoulder to lean on, we are here to help all generations of RAF personnel and their families. We also support serving families if they need us. We give practical, emotional and financial support.