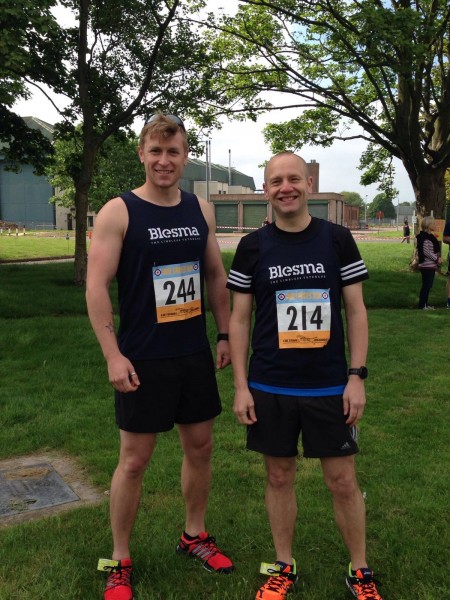 Sergeant Dai Smoldon, 44, from Watton, Norfolk and Corporal Dickie Baker, 28, from Upton, Norfolk are taking on the 26.2 mile challenge after hearing about Blesma’s work through a friend who has benefited from their support.

“I served with Hannah Campbell in Iraq just before she was injured by a mortar bomb and lost her leg,” said Dai, who works with Dickie at the RAF Armed Forces Careers Office in Norwich. “We stayed in touch and when I saw her on Bear Grylls, I wanted us to support a small Military Charity. I asked Hannah about Blesma and she recommended them.”

In 2007, Hannah was serving in Iraq with 19 Tank Transporter Squadron when a mortar bomb hit the building she was guarding. Hannah’s left leg was shattered, left hand was split in two and she was blinded in one eye. Shrapnel also caused injuries to her face and body.

Blesma have supported Hannah in a number of ways since she was injured in 2007. They have supported her with grants, and played a key role in her recovery at Headley Court and in her rehabilitation.

This will be the duo’s first marathon and the finish line of the Marathon will mark the end of their 1000 mile running challenge for Blesma.

“Our challenge was to run the distance from our office to every other Armed Forces careers office in the country which is 2000 miles. We split that between us so the finishing line marks 1000 miles each.”

In preparation for their first marathon, they have taken on a challenge every month since June including a 24 hour runathon, which Norwich City FC footballer Iwan Roberts supported, and several 10k and half marathon challenges.

“I’m looking forward to the Marathon but I am nervous.”