You are here: Home / News / News / RAF personnel scale their own urban mountain 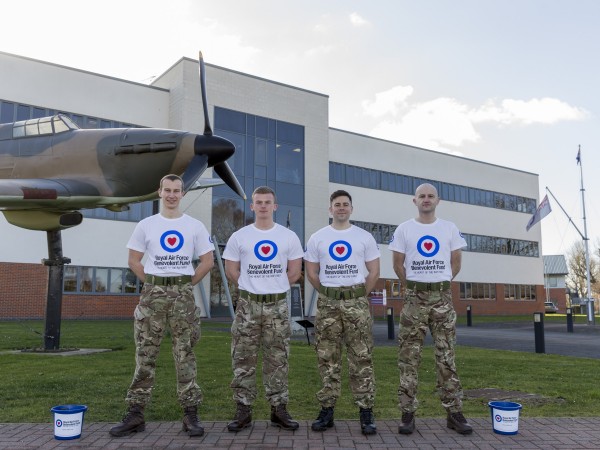 In the first attempt of its kind, four RAF personnel will scale the 837 steps of London’s iconic Gherkin skyscraper 50 times, to match the height of the world’s tallest mountain Mount Everest.

Standing at 180m tall over 38 floors, The Gherkin, officially known as 30 St Mary’s Axe, will double up as the 8,848m high mountain in the gruelling 12-hour challenge, to raise funds for the RAF Benevolent Fund.

Karl said: “The idea originally was to run up and down the emergency stairs at London Underground stations but that idea didn’t fly with their managers! But after I helped out at a collection for the RAF Benevolent Fund at London Bridge, underneath The Shard, I thought, ‘why not climb iconic buildings instead?’ After a few calls here and there, The Gherkin gave us the all clear.

“I’ve never done anything like this before, but it’s great to be doing something that will inspire others that isn’t your normal event. Anyone can ride a bike to raise money but this is something amazing!”

The RAF Benevolent Fund spent XXXX in 2017 supporting more than XXXX people with a wide range of welfare needs from relationship counselling to the Airplay youth support scheme to care home top up fees for elderly RAF veterans.

Karl said: “I’m the first person in my family to join the military – it’s really important for us to mentally and physically test our ability and capacity, and this is the perfect challenge to do that.I have heard from colleagues about the great work the Fund does for the RAF family. It makes complete sense to give back to a charity that is at the heart of the RAF and I can’t wait to get going.”

Paul Hewson, Regional Director for the RAF Benevolent Fund, said: “What a truly incredible feat from the team! When Karl came to us last year and told us about his idea, we didn’t think it was something that could be done, so to see everything come together is a great testament to the dedication and enthusiasm of the team. Support from RAF Northolt has always been strong and we are so grateful that the team have chosen to take on such a demanding challenge for us this spring. I wish all four chaps the very best of luck.”