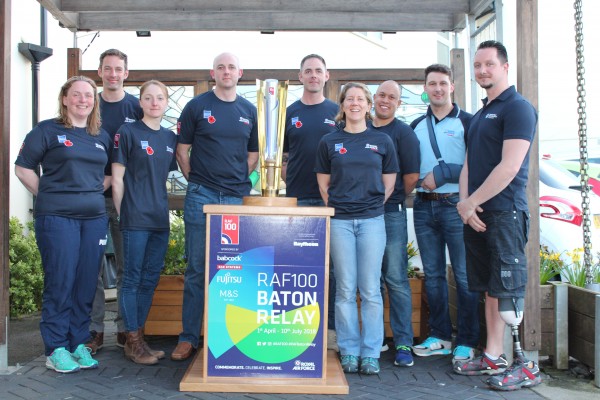 Tide, hills and 106 miles were overcome by a team of six RAF triathletes to deliver the RAF100 baton to the RAF Benevolent Fund’s Princess Marina House on Sunday.

The stop was the latest in the 100-day relay which sees the commemorative baton travel around the country, visiting RAF stations and memorials on a mission to celebrate, commemorate and inspire the next generation. The team, made up of Wing Commander Debs Pratley, Squadron Leader Paul Knowler, Community Development Officer Louise Short, Flying Officer Hannah Dodwell, Sgt Paul Bucknall and SAC Kon-ick McFarlane-Hunt, completed one of the longest stages of the relay by foot, pedal and even braving 8C waters in the North Sea.

At the Fund’s care and respite centre Princess Marina House, the team were welcomed by RAF Benevolent Fund Ambassador Mike Goody. For Mike sport played a huge part in his rehabilitation after her lost a leg while serving with the RAF Regiment in Afghanistan. The Invictus Games gold medallist, who lives in Bognor Regis, said: “To be part of the celebrations of 100 years of the RAF is fantastic and it’s a great opportunity to highlight all the great work the RAF Benevolent Fund has done to support the RAF Family in those years.

“It is quite a momentous occasion, not only for the RAF but also for the RAF Benevolent Fund.”

The baton had travelled 106 miles through Brighton from The Memorial to the Few at Folkestone where it had been delivered on Saturday by Red10, the special edition Aston Martin Vanquish S Red Arrows car and its owner Humphrey Bradley, who won the car in the Fund’s raffle last year.

RAF Triathlon OC Wing Commander Debs Pratley took part in the relay, including a brisk swim! She said: “The hardest part mentally was the swim. Physically we didn’t swim a great distance but in those temperatures it was tough.

“It’s quite fitting that the RAF Triathlon team brought the baton here to Princess Marina House because the team has the whole force represented, regulars, reservists and civil servants – the whole RAF Family which the RAF Benevolent Fund supports. RAF100 is all about celebrating, commemorating and inspiring and hopefully by taking on a challenge of travelling over 100 miles in a day we have done that.

“For me personally it is a proud moment. I am from a long history of family who have served in the military and I am the third generation of my family who have been a Wing Commander. To have the opportunity to reflect on those 100 years and look ahead to the future has been really special. I genuinely think the RAF, the community it forms and the family it forms is one of the best things. It is one of the most inspirational jobs.”

On Monday the baton will travel into the south west of the country, led by the RAF Orienteering team.

To find out more about celebrations to mark the centenary of the Royal Air Force and how you can support the RAF100 Appeal log on to www.raf100appeal.org