A veteran from Hook in Hampshire has been cycling for over 15 months to raise money for SSAFA, the Armed Forces charity after they supported him when he was serving in the RAF. 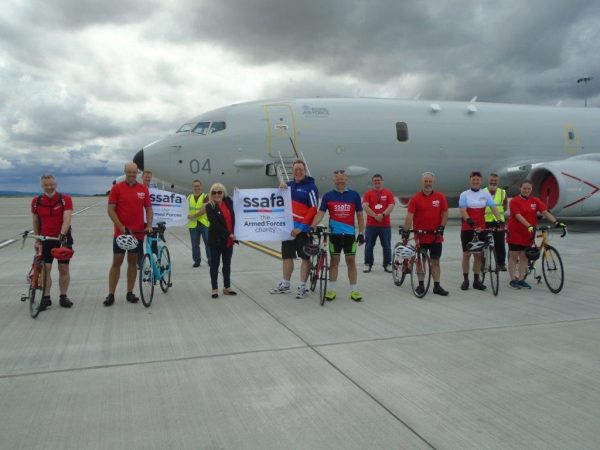 OB began his epic fundraising endeavour in May last year and has since taken on a series of challenges across key military and Boeing sites. He has already raised over £3,000 for SSAFA, the Armed Forces charity, but has admitted that he won’t stop cycling anytime soon.

“I’ve always been an active cyclist and in May 2020, I decided to begin tracking my cycles to raise money for SSAFA. I initially set a fundraising goal of £1,000, but quickly increased this to £5,000.”

“SSAFA provide a lifetime of support to the Armed Forces community, and this is a chance to give something back for their unfaltering support. For me, there isn’t a reason to stop cycling or fundraising anytime soon – I’ll continue to cycle for as long as the money keeps coming in!”

During his 34-year career in the Royal Air Force, Simon and his family were supported by SSAFA in a number of ways.

“SSAFA was a comfort to me and my family. They were there to support us when we needed them most. Firstly, at RAF Benson and then again at RAF Odiham to support the family through an illness. They provided us with invaluable support, including emotional and financial, that meant we had one less thing to worry about during some challenging times.”

Simon currently works as the Lead Operations Analyst at Boeing’s Portal in Hampshire after he joined the company in 2017. The former Helicopter Crewman returned to full-time reservist duty last year, when he was mobilised to support Joint Helicopter Command as part of the military’s response to the Covid-19 crisis.

“After my London to Brighton cycle-ride for SSAFA was cancelled in May 2020, I wanted to continue the support; SSAFA didn’t stop for Covid-19 so neither did I. I’ve now cycled over 3,000 miles and this distance grows steadily, as does the amount raised through charitable donations.”

Events for the remainder of 2021 include a confirmed place at the London-Brighton 55-mile cycle in September and a Lincolnshire ‘Sprint’ race over 90 miles in October. Simon’s calendar for 2022 is progressing well, with a planned repeat of the military site routes he undertook in 2021, plus a place in the UK’s London-Paris cycle ride, all in support of SSAFA.

“If anyone would like to get involved with future cycling events or support with a charitable donation, please do visit my fundraising page. Any support you can provide makes a real difference.”

Boeing selected SSAFA as its UK charity partner in 2019. The relationship centres on the Boeing Emergency Fund, providing crisis support to current and ex-serving members and their families. Boeing also supports the SSAFA mentoring scheme; Boeing employees have volunteered as mentors assisting service leavers whose future employment options might have been directly affected by the pandemic.