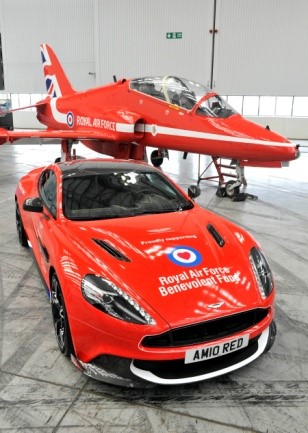 The unique Aston Martin Vanquish S is one of just 10 being made. Photo: RAF Benevolent Fund

The £275,000 car is a representation of a spectacular Red Arrows Vanquish S model which the RAF Benevolent Fund is raffling off this December. The car is one of just 10 unique cars which will roll off the Aston Martin production line later this month, created by the iconic carmakers in a tribute to the world famous aerobatic display team.

See the car for yourself Kop Hill, Princes Risborough, on Saturday and Sunday (September 16 and 17) as it joins hundreds of others taking the historic trip up the hill.

John Biggs, Kop Hill organiser, said: “We are really excited the RAF Benevolent Fund decided to bring the car to this year’s event and even more excited to see and hear it go up the Hill!”

The Vanquish S has been generously donated to the RAF Benevolent Fund by Aston Martin Cambridge. Reds One to Nine have been sold privately and Red 10 will be going home with the winner of the raffle drawn on December 1. It features several bespoke design nods to the RAF aces, including the Red Arrows Squadron crest lacquered into the screen veneer as well as sill covers with the Diamond Nine formation engraved on them.

Air Vice-Marshal David Murray, Chief Executive at the RAF Benevolent Fund, said: “We have supercharged the conventional raffle. This is one of the most exclusive Aston Martin cars ever built – a once in a lifetime prize. By buying just one ticket you will not only have the chance to drive away in the ultimate sports car, but you’ll also be offering your vital support to help current and former members of the RAF in their time of need.”

The RAF Benevolent Fund is the RAF’s leading welfare charity, providing assistance to serving and retired personnel in their hour of need. The Fund provides a spectrum of support from emotional and mental health to practical and financial assistance for the whole RAF Family.

If you want to buy a ticket go to www.rafbf.org/Red10