You are here: Home / News / News / Riding to recover 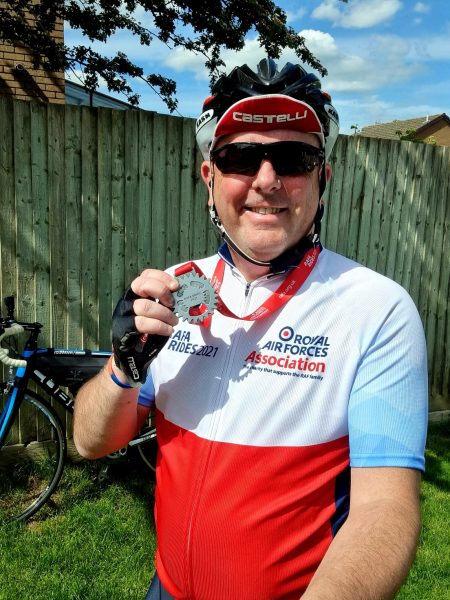 RAFA Rides 2022, made possible thanks to generous ongoing support from security and aerospace company Lockheed Martin UK, will take place on Saturday 11 June. Riders can tackle 25, 50, 75 or 100 miles, depending on their level of fitness (and optimism) or join virtually from anywhere in the world with an internet connection.

The 2021 event saw 810 riders join together from around the world to take part. This included 250 who cycled routes around the beautiful Leicestershire and Rutland countryside, with the rest joining virtually from 20 countries across six continents, all united in cycling for a cause close to their hearts.

Stevie has been a mover in the RAF for over 30 years, but he has been a keen cyclist for much longer. A bicycle was the only way he could get to see school friends when he lived near Evesham as a boy. He now laughingly refers to himself as a ‘MAMIL’, a middle-aged man in Lycra! It was this love of cycling that ‘flicked a switch’ for Stevie and got him on the road to recovery during a very dark time in his life.

Despite not serving in the RAF, Stevie’s father, Terry Joy, became heavily involved with the Costa Blanca Branch of the RAF Association when he and his wife moved abroad in 2004. He held several committee positions over the years becoming branch president in 2012, until ill health brought him back to England in 2014.

As with so many people in 2020, life was ticking along as usual, then the COVID pandemic hit. Terry contracted the virus and was hospitalised in March 2020. Stevie wasn’t allowed to visit his father on the high dependency ward, but was called one day by a doctor and told to get to the hospital as quickly as he could.

Stevie has seen some harrowing things, but nothing prepared him for his father’s final hours. In full PPE he was shown onto a ward of 12 people, most of whom never went home.

“The image of my father on that ward, surrounded by so many others essentially waiting to die has stayed with me. I consider myself a resilient person, able to process traumatic situations, but this floored me completely. I am grateful that I was at least able to be with Dad when he passed away, but the experience left its mark.

“My mental wellbeing really suffered in 2020, despite the amazing support of my family. I was spiralling, full of self-pity, withdrawing from others and not looking after my health. I was mindlessly scrolling through Facebook in the New Year of 2021, when an advert for RAFA Rides caught my eye.

“I realised I needed to take control again and this was the perfect way to get that process started. I signed up there and then. The first time out on my bike felt like flicking a switch – I instantly felt better. As the weeks and months went on, I lost the weight I’d put on, I started connecting with friends again and I had a focus. RAFA Rides was the perfect event, as it involves cycling, which I love, but also feels like I’m doing something for Dad and a cause he loved.”

With a fundraising target of £250, Stevie shared his training exploits with friends on social media and was amazed at their generosity. In total he raised over £1,000, which left him ‘gobsmacked’.

Stevie has already signed up for RAFA Rides 2022, but this time it’s a far more serious endeavour. In 2021 he rode 54 miles. This year he hopes to ride the 260 miles of King Alfred’s Way over five days. The route will take in iconic monuments including Stonehenge, Avebury stone circle, Farnham Castle and Salisbury Cathedral.

If you would like to support Stevie with his fundraising, you can donate here   https://www.justgiving.com/fundraising/steviejoy