A statue commemorating the life of a World War II pilot has been unveiled in a ceremony at Edinburgh International Airport.

Eric ‘Winkle’ Brown, who died in 2016, was one of the heroes of the Second World War having flown every major aircraft including fighter jets and bombers. To this day, Winkle Brown continues to hold world-records for the number of deck landings made at sea, take-offs and for flying 48 different types of aircraft. When war broke out, he volunteered for the Fleet Air Arm, where he went on establish himself as one of Britain’s bravest aviators.

The bronze statue of Winkle Brown was organised by the Edinburgh University Air Squadron Association and partially funded by the Royal Navy and Royal Marines Charity (RNRMC) who provided £14,000. Fittingly, it was erected at Edinburgh Airport, Brown’s city of birth.

Executive Warrant Officer on board HMS Prince of Wales and Trustee at the RNRMC, Gary Nicholson MBE, said:

“It was an honour to be involved as both a EWO of HMS Prince of Wales (PWLS) and Trustee of the RNRMC. As someone serving on board an aircraft carrier considered to be the future of naval aviation, it wasn’t lost on me that the extraordinary number of deck landings Winkle-Brown completed will never be repeated again.

“It was particularly fitting that the statue was housed within the grounds of Edinburgh Airport and takes centre stage upon entry to the airport.” 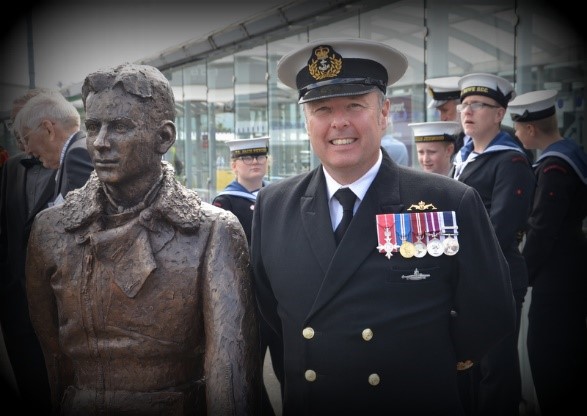 “Putting this statue in place to recognise this inspirational aviator would not have been possible without the support and encouragement of the Royal Navy and Royal Marines Charity and our association is exceptionally grateful to them.”

The Edinburgh University Air Squadron Association is due to set up a flight experience scholarship for disadvantaged youngsters, which will soon be known as the Winkle Brown Scholarships.

From life changing grants during times of immediate need, to smaller deployment grants that aide morale and retention – the RNRMC works hard to ensure that no one is forgotten.